January is almost over and I must admit,.. I haven't done that many fashionable activities. Trust me, when you're working on geeky and science-y things together other geeks around you towards a deadline... fashion is the last thing on my mind. :-P 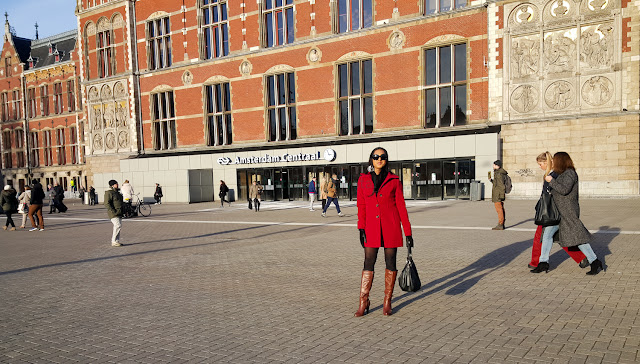 Fortunately, earlier this month, the weather was sunny (though still freezing cold!), so I met up with my long-time friend Bianca for some catching up and among other things.. we also visited the famous Hermitage Museum. 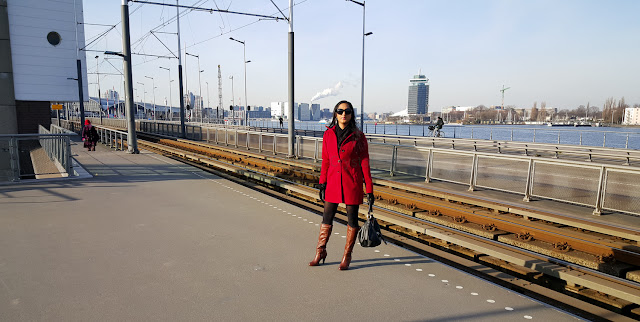 As always, when travelling to Amsterdam, it's easier and cheaper to park outside the city and take the public transport into the inner city. You can see it was pretty cold.. leather gloves, tights and long coat and boots! It was below 0 degrees Celsius (that's 32 degrees Fahrenheit for you Yanks :-P ). 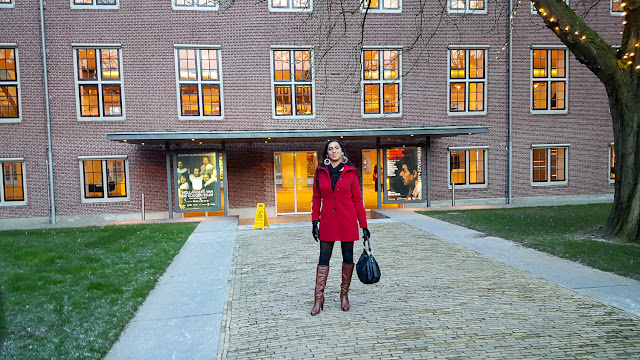 While walking towards the entrance of the actual museum, you had to be careful.. there were still patches of ice scattered around. Very treacherous! 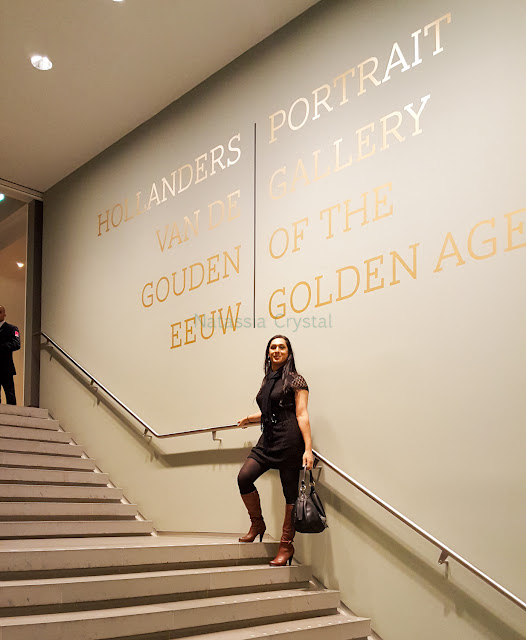 The exhibit was on the Dutch citizens during the Dutch Golden Age and then primarily about the rich upper class in Amsterdam in the 17th century. They are mostly depicted in paintings called 'schuttersstukken', a type of group painting of which the most famous one is 'The Night Watch' by Rembrandt.

Obviously, this painting is displayed in the Amsterdam Rijksmuseum, so they projected an image of 'The Night Watch' with a beamer between all the other real paintings. 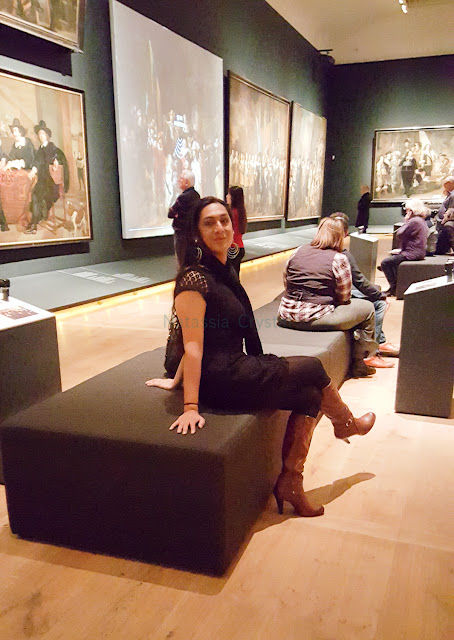 The visit was lots of fun and very educational.. and after such an activity (and a bit of window shopping) it was time for dinner and coffee, so we went to do just that in the Bijenkorf Shopping Centre. And after that, a bit of chilling on the couch in the stylish coffee bar. :) 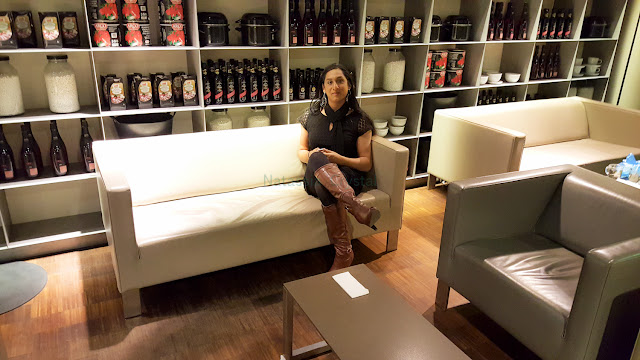 Just like that 8 hours had passed and we had walked about 14 kilometres in total throughout Amsterdam and the museum and the shops! I was glad I was just wearing my 4 inch heeled boots! ;-) 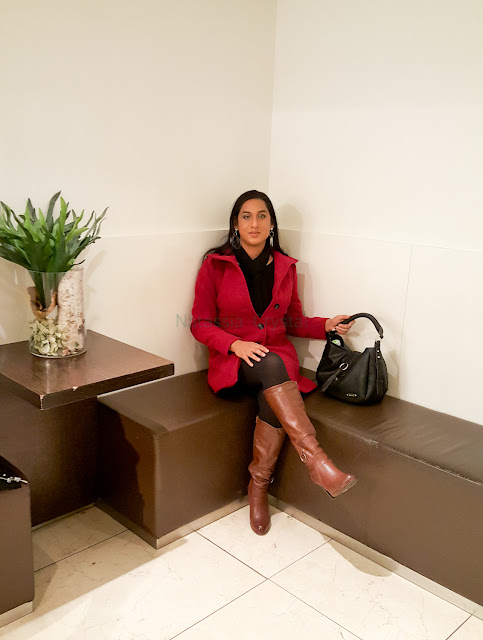 Of course, after having spent a day together roaming around.. we also took a picture together outside the museum's gates. We didn't plan our outfits, but I do like the green next to the red colour! 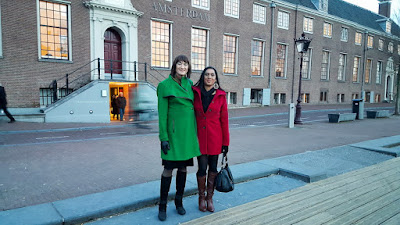 Bianca was so nice to also film some small clips of me.. so I'm very grateful that I can present this video! :D

Hmmm.. my intention of posting something every week did not really go as planned. Everyone who is doing something like blogging or vlogging knows that consistency is important.  Just as much as the content of what you post. But yeah, it's just very easy to crash on the couch after a long day of work. ;-)

Of course, for me.. it also doesn't help that it's winter. I love snow, but really.. I'm the kind of person that lights up when spring starts knocking on my door. So, I decided to prepare myself for that inevitable glorious moment by diving into my closet and test-driving some outfits. :) 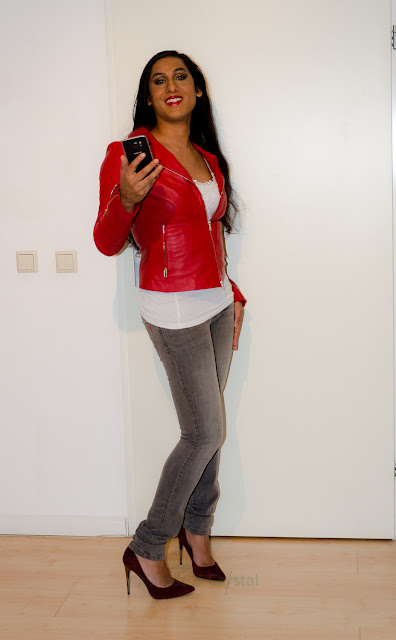 Y'all know I love dresses and skirts, but I'm just as much a fan of jeans. These ones were 10 euros from Berschka and they fit perfectly if I may say so myself. And I love colours that stand out.. so this fire truck red leather jacket was a no-brainer!

The heels I'm wearing here are not for hours of shopping, but for a casual Friday at work or a lunch date.. I'd pick these babies. :) 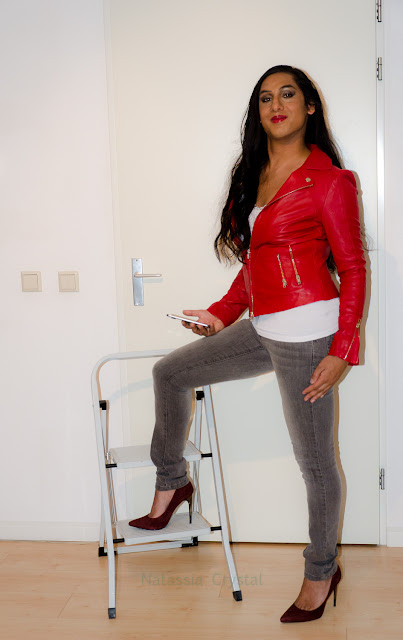 I will limit myself to these two shots (less is more, right?).. this white background is quite boring. :-P


Sometimes I film myself inside, but most of the time I can't be bothered. So here's some extra footage of the white skirt/blouse outfit that I wore during my holiday in France. Hope you enjoy it!

Hey you all! It's 10 days into the new year. How is it going for you? For me, January is still quite relaxed.. the first workweek was not too busy.. however, the weekends are still too short! :P

How are the New Year's Resolutions coming along? I did my part by spending time on my cross-trainer and doing a lot of sit-ups.. trying to undo the damage from all the various dinners during the holidays. Need to flatten that belly for those spring and summer dresses, right?! ;-) 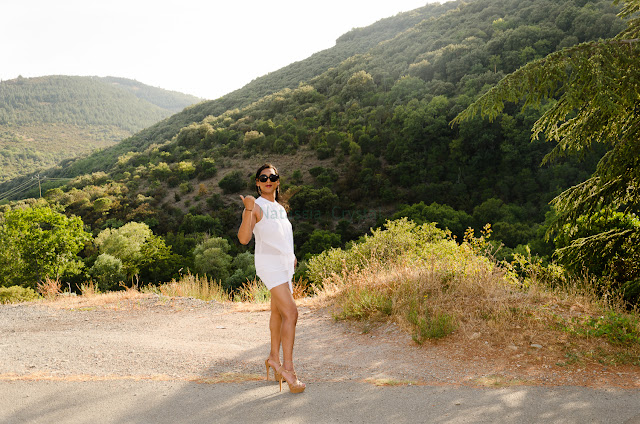 By the way, it's not just for reasons of vanity that I'm exercising like crazy. In a couple of weeks, I will go on my yearly snowboarding trip in France. And since last year was so busy with work, my physical fitness is not as good as it normally is. So I hope I will have the will-power to exercise every day! 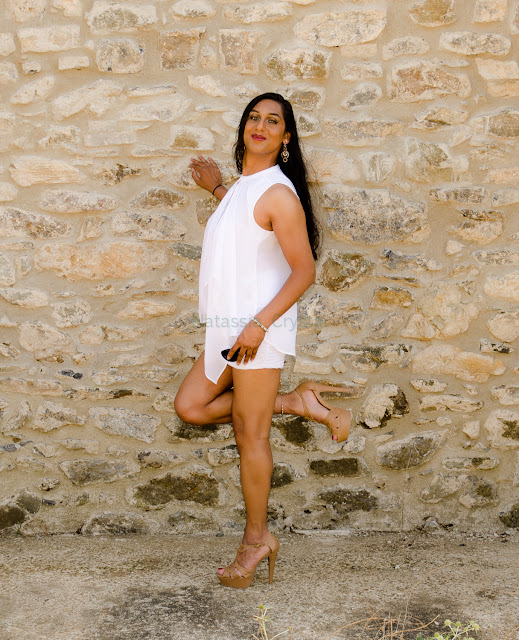 And speaking of snowboarding in France,.. since the Dutch weather has been truly abysmal, I have not been able to do some outdoor photo-shoots. And I still have some stuff lying around from my summer holiday in France, I might as well just post those last few sets. I hope you all don't mind. :) 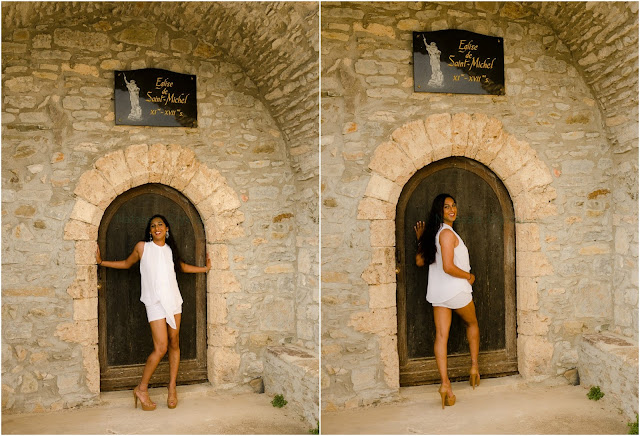 While driving around in the area, we saw this very small church and we thought it would be a nice place for a couple of photo-shoots. So we did just that.. occasionally taking a break when other people showed up for a visit.  :-P 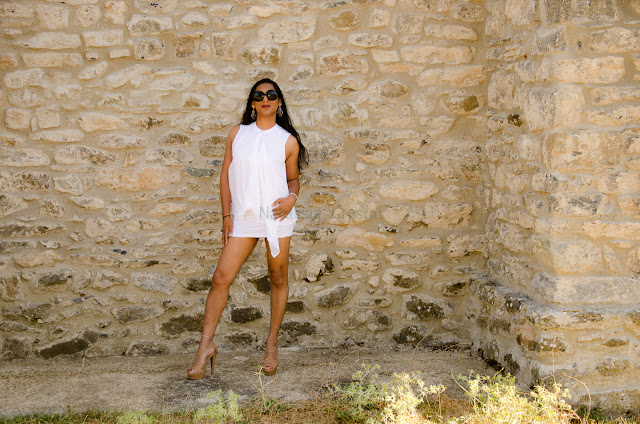 The outfit itself is not really special but perfect for when the temperatures are above 35 degrees. Just all white.. and then some high heeled sandals (hey.. I didn't paint my nails for nothing). Nude coloured to make my legs look extra long! You know how it works. ;)

If the weather continues to be uncooperative, I will probably resort to some indoor outfit photo-shoots. Even though I think they are inherently crappier.. since the background is boring and the lighting is not really good. Ah well.. first world problems, right? ;-)


Of course.. I did get some video clips of me in this outfit.. walking around in a very warm France!

Oh no, two full days into 2016 and the first post is a recap of 2015? Well.. I spent the first day of the year recovering from my NYE party and yesterday I decided to take it easy and enjoy a lazy Saturday. :)

First of all, I want to wish you all a very happy new year and all the best for 2016!! How did you all spend your NYE and the rest of the holidays? And do you have any new year's resolutions? Was 2015 a good year for you.. or are you glad to see it go and are you looking forward to 2016? 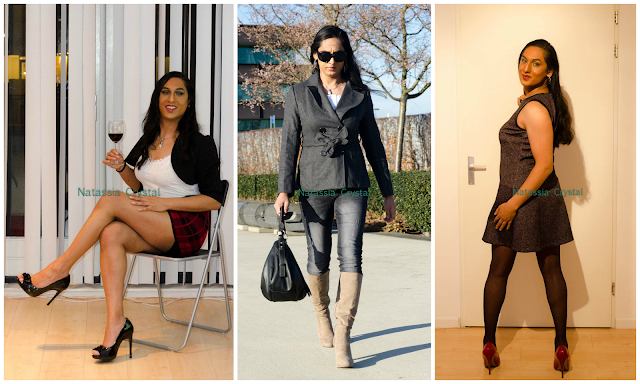 2015 did not start well for me with my house getting broken into. And 2015 also marks the year where I completed the move from my old job to my new job. The fact that I had to leave my old job was not voluntary. However, ultimately.. the new job is very cool, so it worked out! But it did stress me out in the beginning of the year. 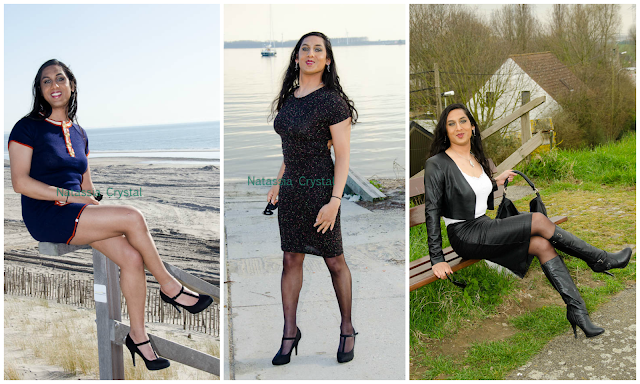 Most of the year was pretty okay for me. Mostly working, but I did find time to go on a couple of holidays, hang out with friends and of course, satisfy my fashion and high heels addiction! :D 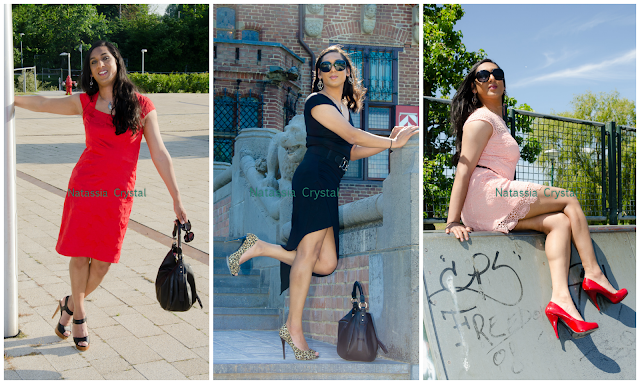 The weather has been really nice over here in the Netherlands, so I could wear a lot of dresses and pumps/sandals. As you can notice, I almost wore no boots in 2015. And for my holiday in France, I didn't even pack boots. :P 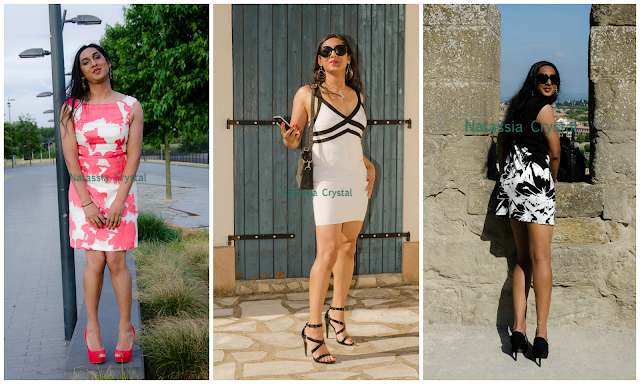 So I usually don't really have year-specific resolutions since I always try to live the life I want, but I guess for 2016, I really want to re-balance my work life and personal life. 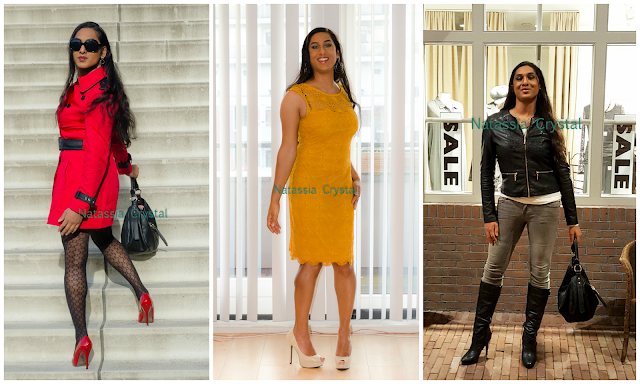 To close off this first post of 2016, I want to thank all of you who read my blog and left such nice comments! ;-)