Well, I guess by now.. it should be a) totally obvious that they're having this little football thing going on in Brasil called the World Cup and b) even more obvious that I'm a total football nut! I will watch the matches in the Dutch League, the important ones of the English, German and Spanish leagues and of course the clashes between the European clubs in the Champions League. However, what really gets me excited and causes my heart to skip a beat are the UEFA European Championships and the FIFA World Cup! 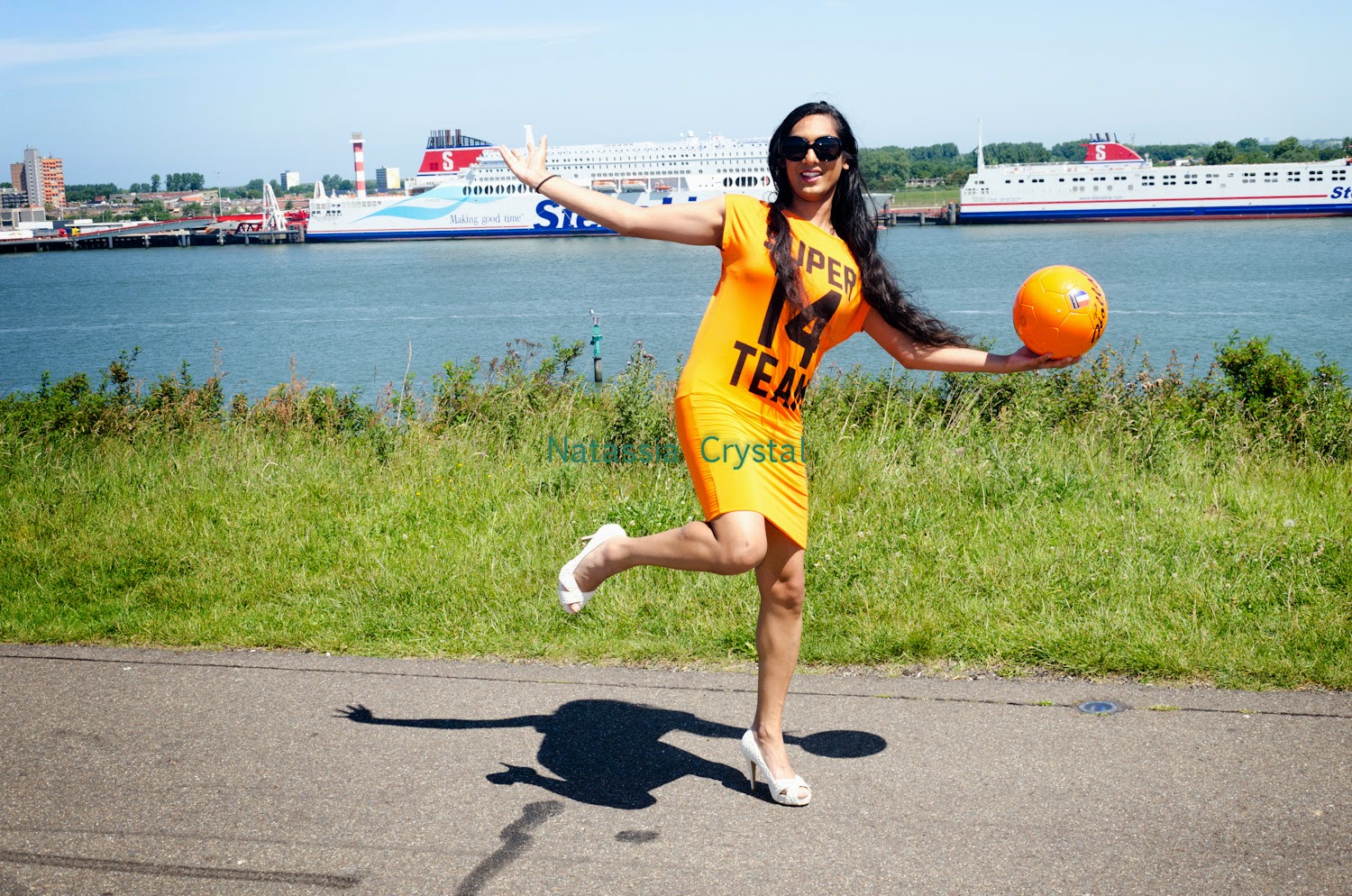 Sure, I will watch the Olympics and I even enjoy watching the Super Bowl, but nothing gets me Orange crazy like watching and supporting the Dutch national team, the Orange Lions! The great thing about the colour orange is that it is very distinctive and bright and happy, so I do love dresses, shirts, hats, sunglasses and what else they come up with. During the last few tournaments, several beer brands and fashion designers have brought out cute little orange dresses, either for a six-pack of beer or for next to no money. And you all know me... I love me some cheap dresses! :P 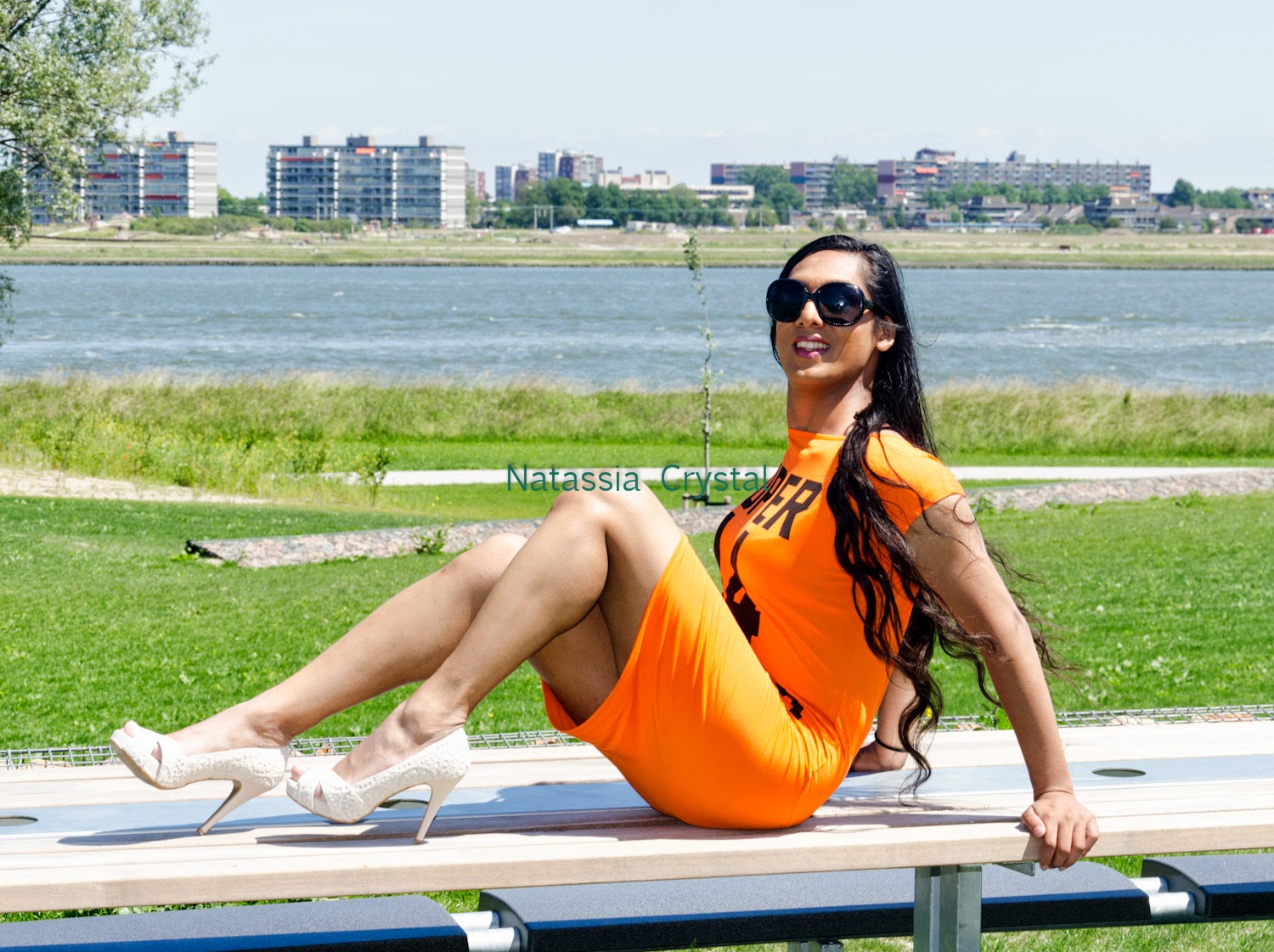 This is the 2014 dress designed by SuperTrash and I thought it would be nice to model it in the sun. While driving around, we also found a petrol station that sold orange footballs. How awesome is that?! 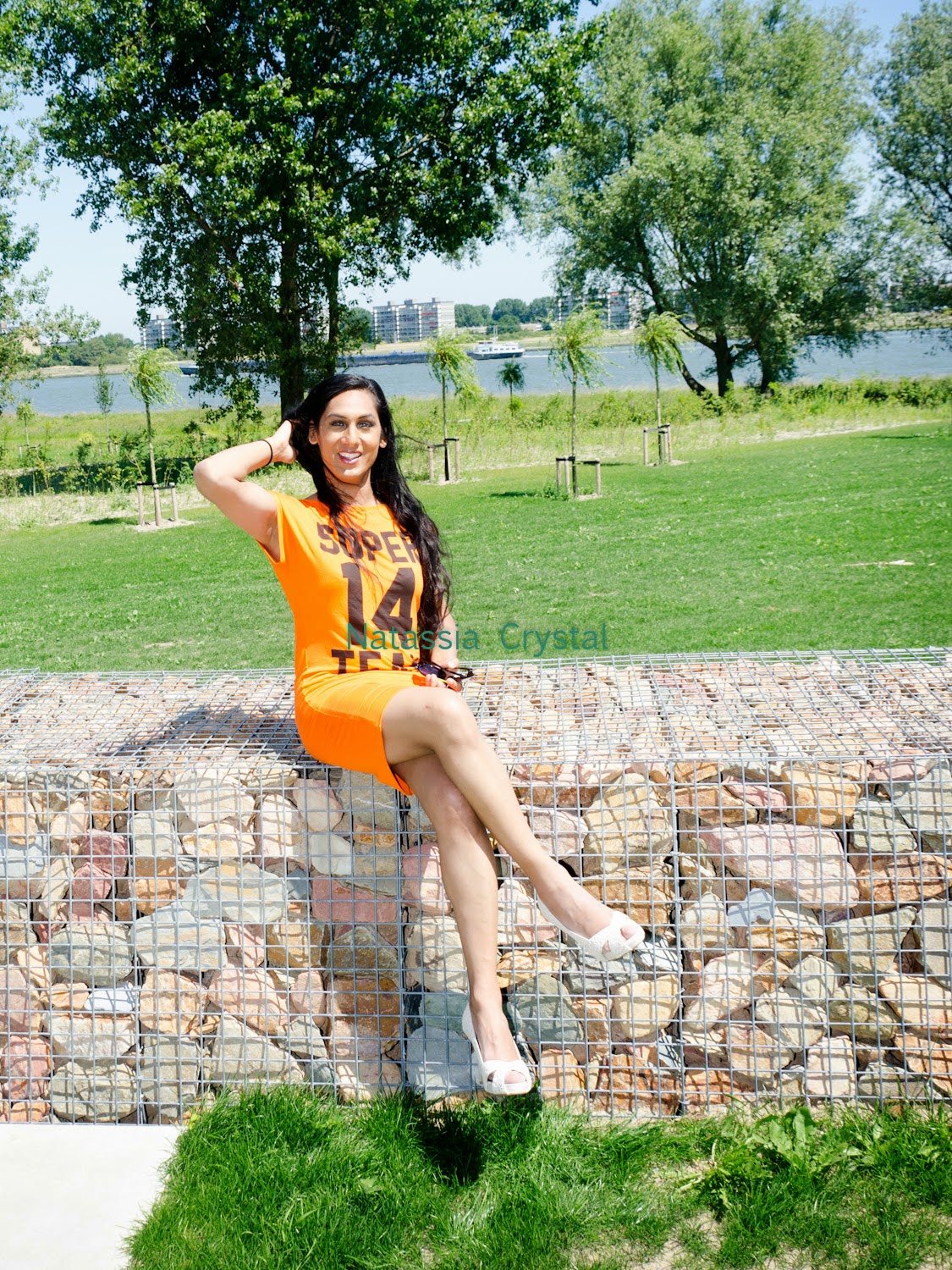 The number 14 stands for the fact that the World Cup is this year.. in 2014, but the number 14 is also the number of our most famous player ever.. Johan Cruyff (Cruijff if you're Dutch). Incidentally, he has yet to become the manager of our national team, but at this moment nobody cares because Louis van Gaal is doing a bang-up job! 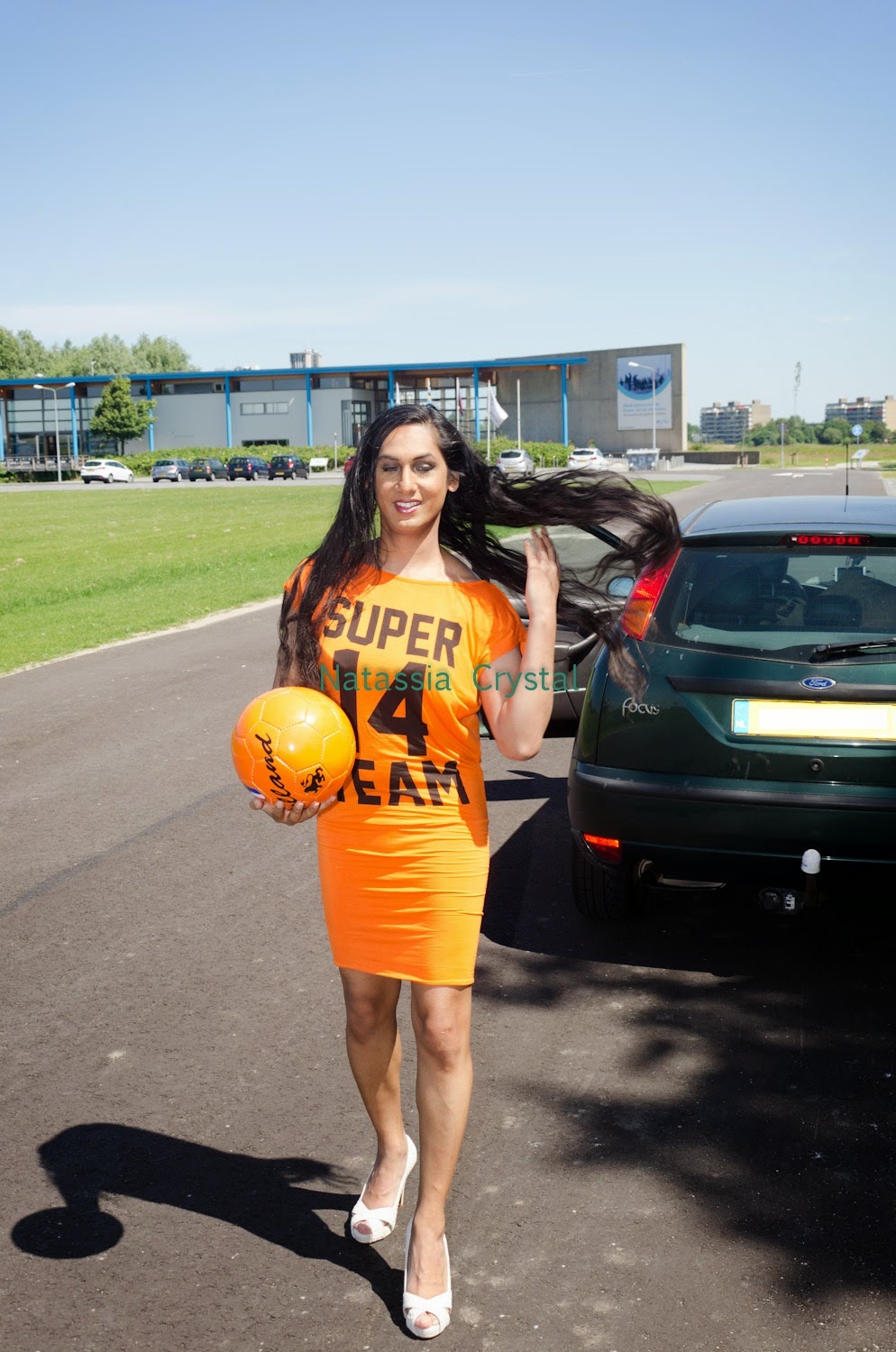 Anyway, as far as this World Cup is concerned.. it has been amazing! It started with the epic win over Spain.. and it hasn't stopped yet!

Let's hope this will continue for 3 more matches! :P 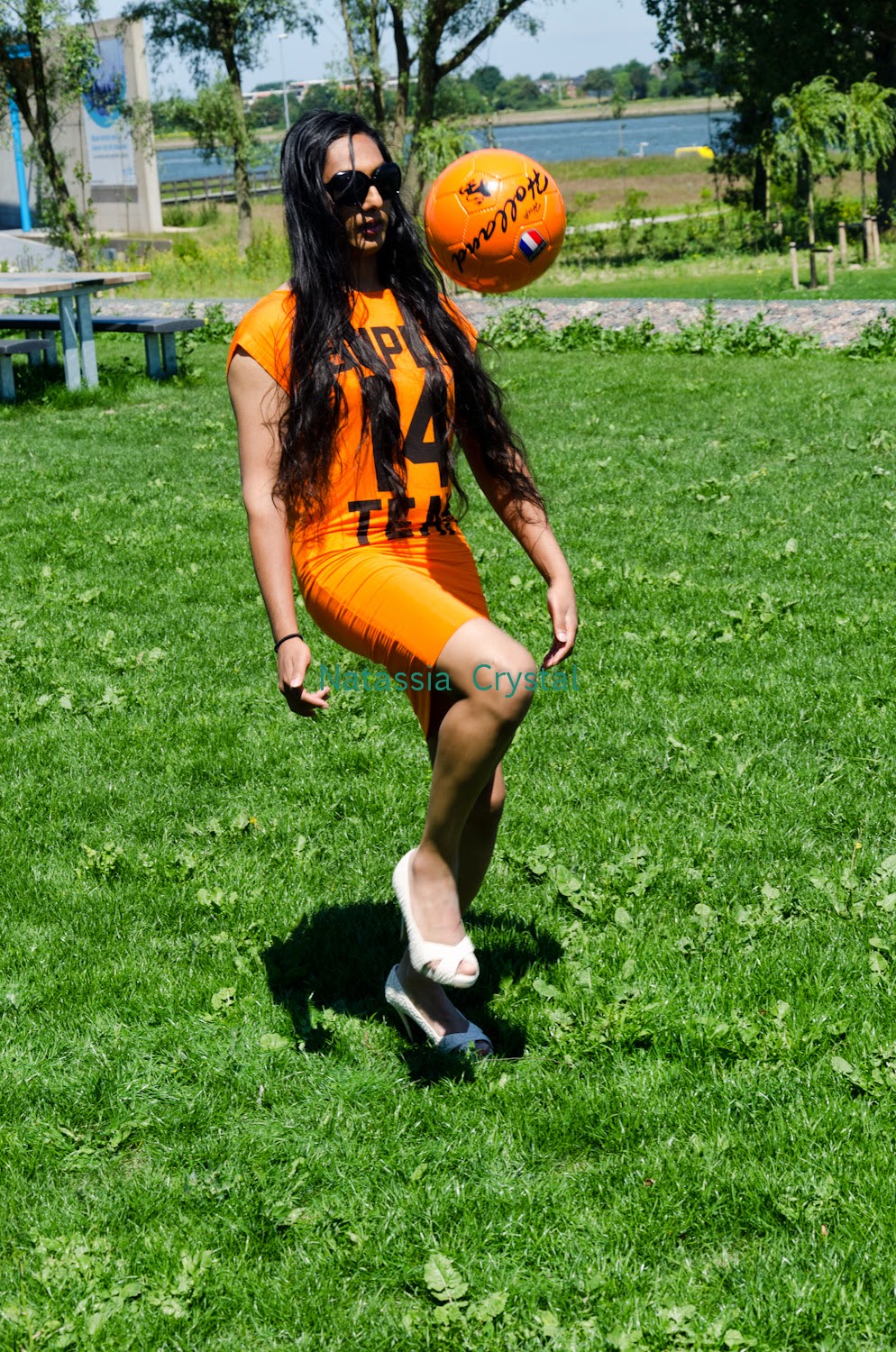 I will try to make a video of me trying to stuff with a ball while wearing heels, but my skills are a bit rusty, so give me some time. :) In the meantime, here is the link of the last one in Belgium, in case you missed it twice! :-P

Tassia in the UK - tourists (and models) in Harwich

Last month I visited the UK and met up with Kay, Helen and Janet, which now seems like ages ago.. can't wait cross the North Sea again! Before Kay and I met up with the rest.. we first enjoyed the sunny day being all touristy in picturesque Harwich.

So first things first,.. getting ready and so did Kay (who stayed in the same hotel). Me being the usual slow morning person, Kay was quicker than I was in getting ready, so while I was finishing up, she was patiently waiting. She took a quick snap in the hotel room before we went out. 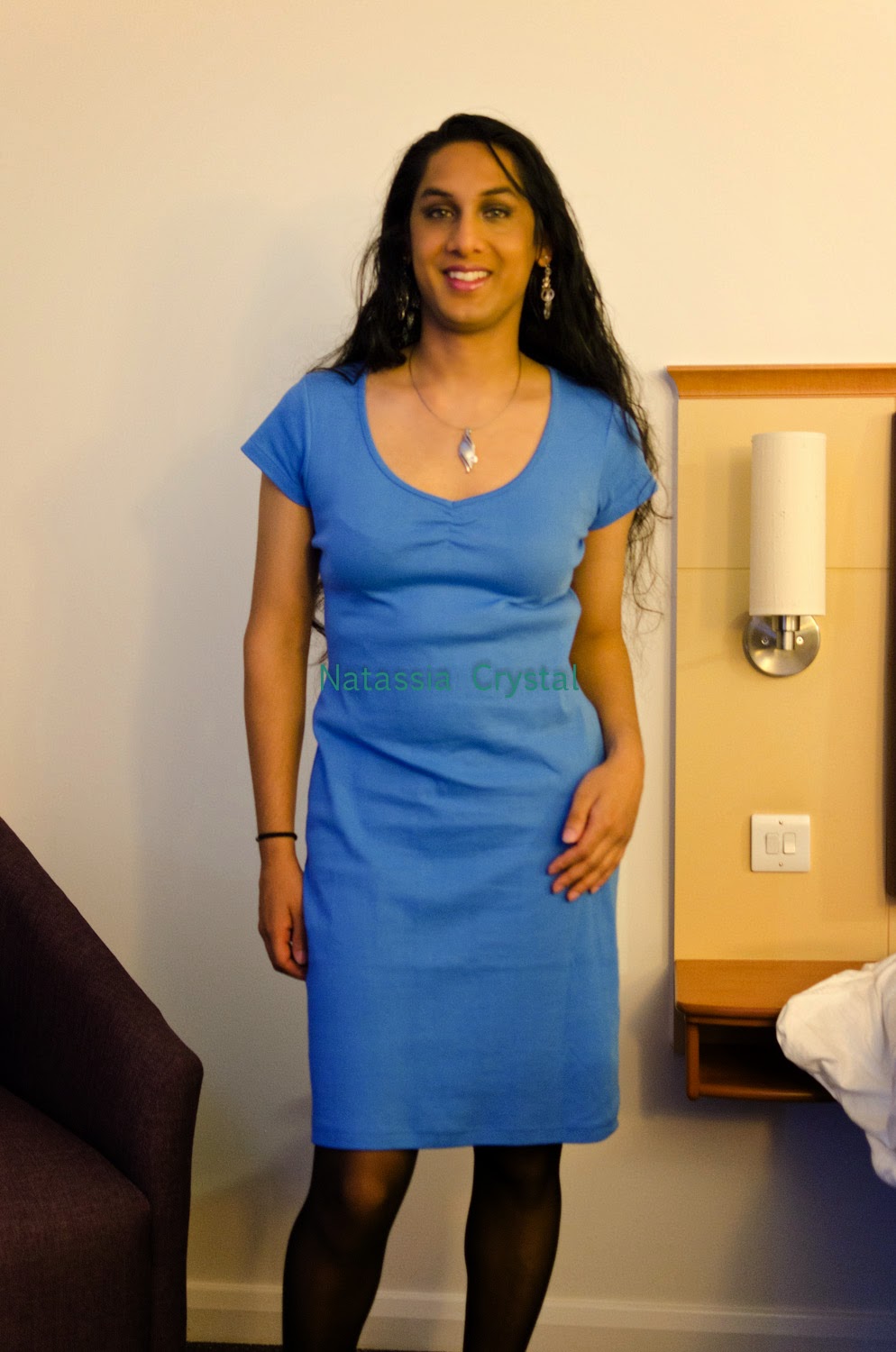 We stayed at the Premier Inn,.. nothing too fancy, but nice and clean.. and the staff is friendly. If the weather is nice, I would definitely recommend getting a hotel for one night instead of heading to your actual destination. 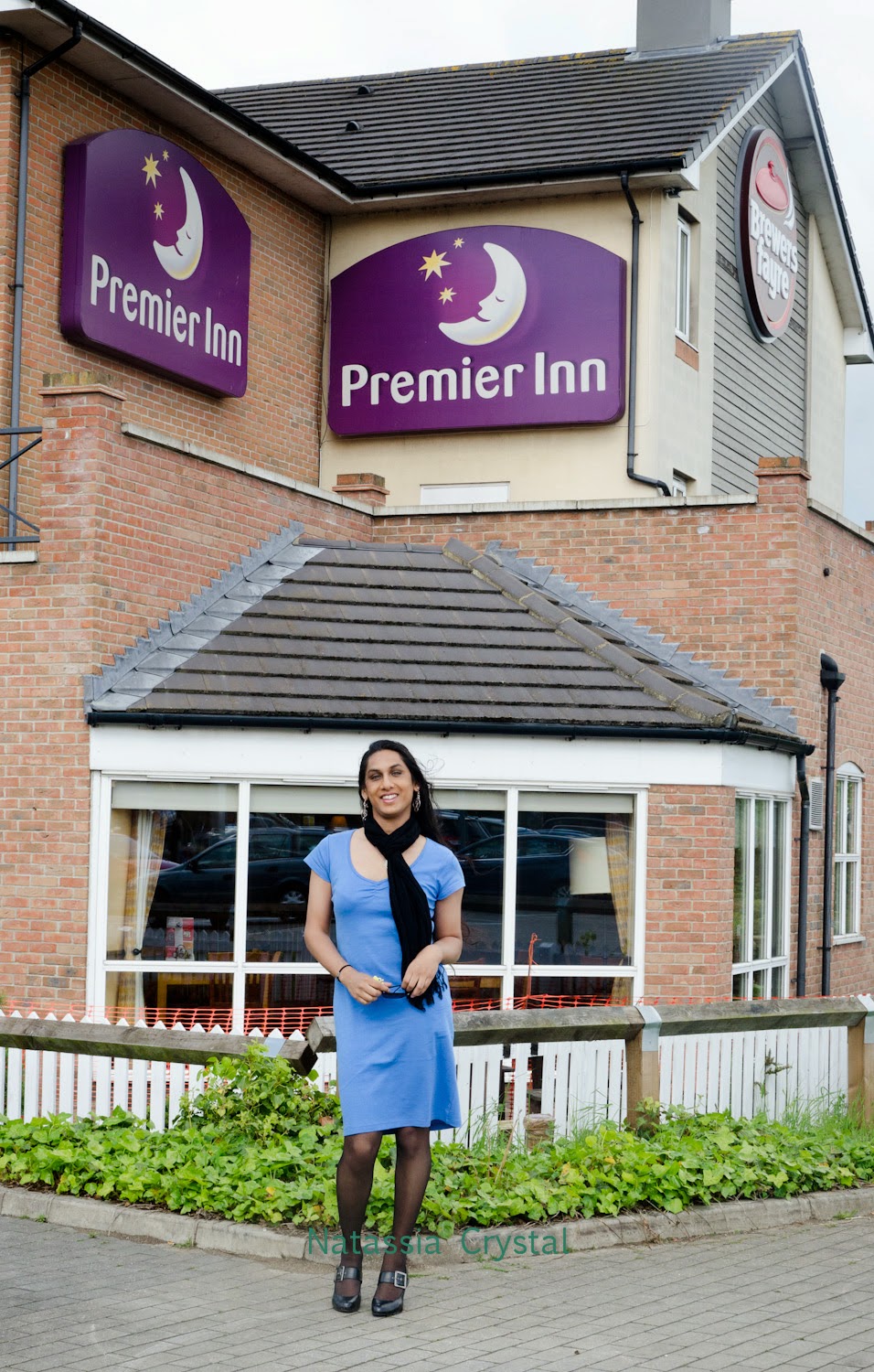 First order of business was to park the car and of course, 2 seconds out of the car and we had to take pics right there. While we were messing with the self-timer, a receptionist from the hotel/bar across the street noticed us, came over and offered to take some pics. Such chivalry! :) 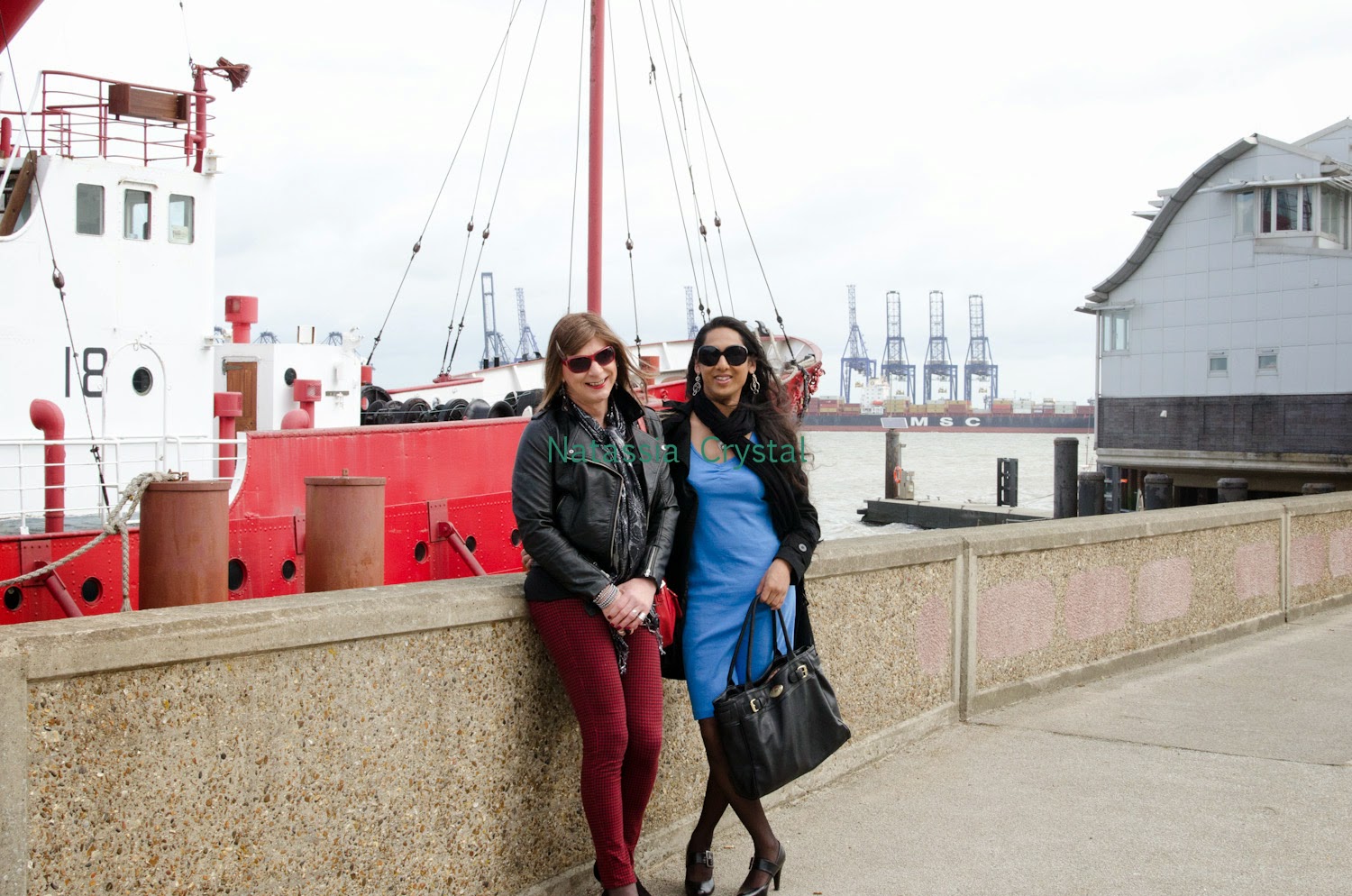 As you can see, Harwich is an industrial harbour city.. not just allowing for European tourists to enter the UK, but also for actual proper cargo transport. It's not that big.. but it's pretty (apart from all the UKIP posters that is.. ) 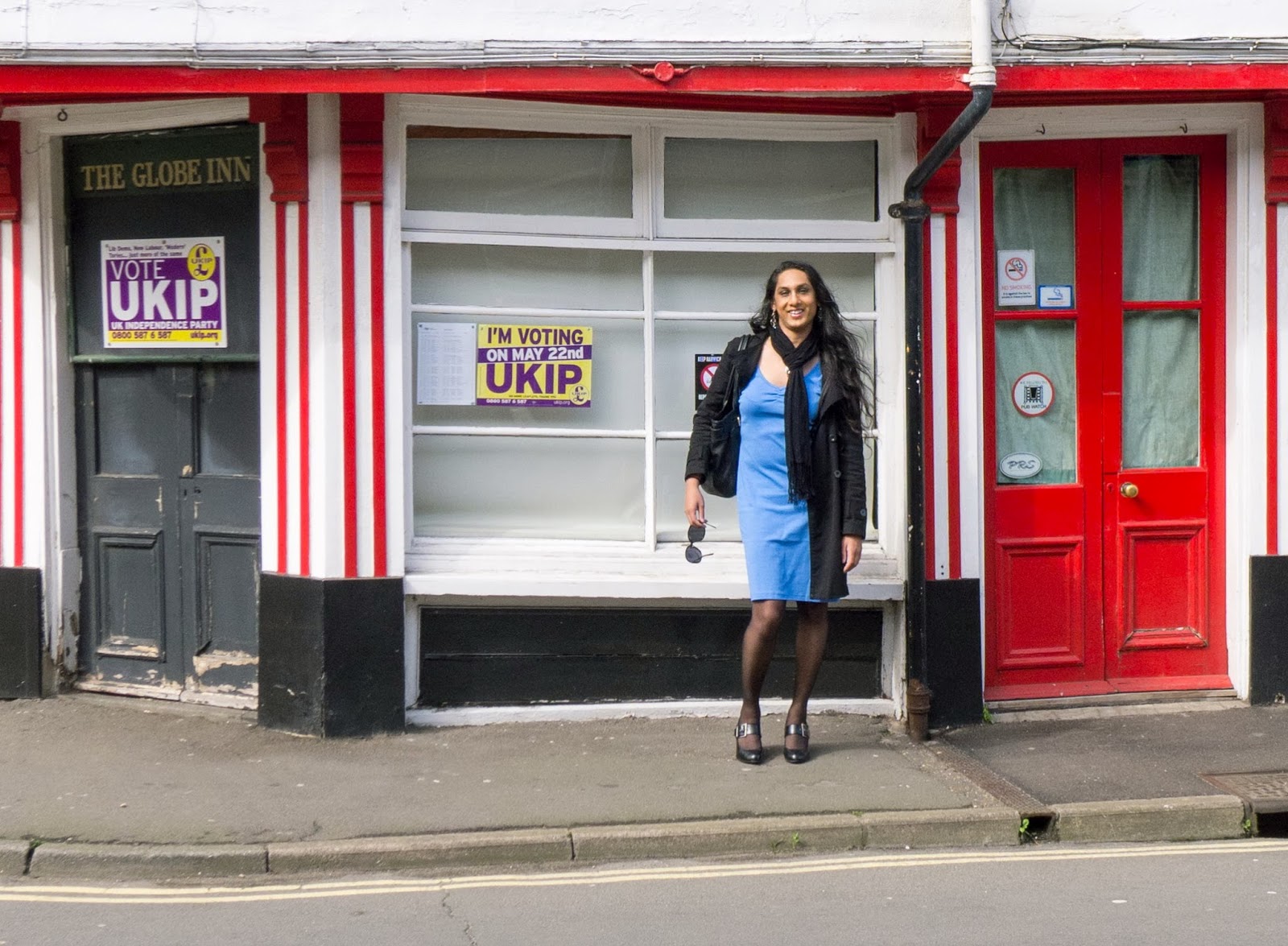 Like I said, a beautiful sunny day, but seeing as we were near the sea.. the wind was blowing quite hard. This sometimes resulted in a shot like on the left.. and usually I just ended up trying to untangle my hair! :P 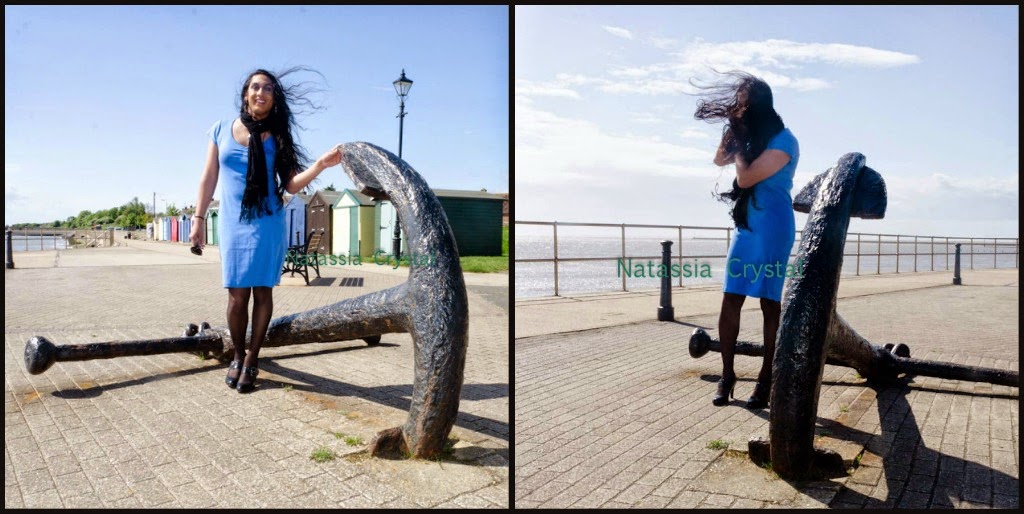 Now the following shot might seem like shameless posing.. and that's because it is! :P Seriously though, the day before.. the weather was so crappy and dreary with low temperatures and drizzle. So, just standing in the sun, letting it in soak in.. and enjoying the breeze.. it was a moment of bliss! 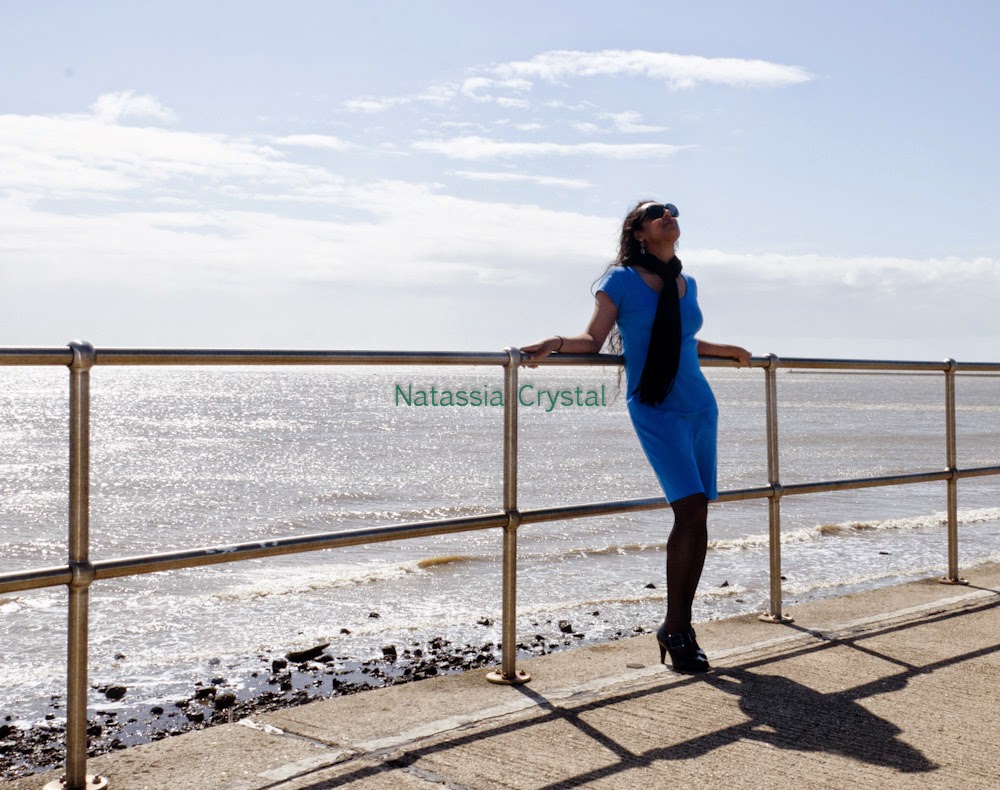 Most of the morning, Kay and I would just spend walking around and chatting. And of course, it was not just Kay taking pics of me.. we both behaved like models in the countryside.. and I took plenty of pics of Kay. Have a look at her pictures pages at Flickr or Ipernity. :) 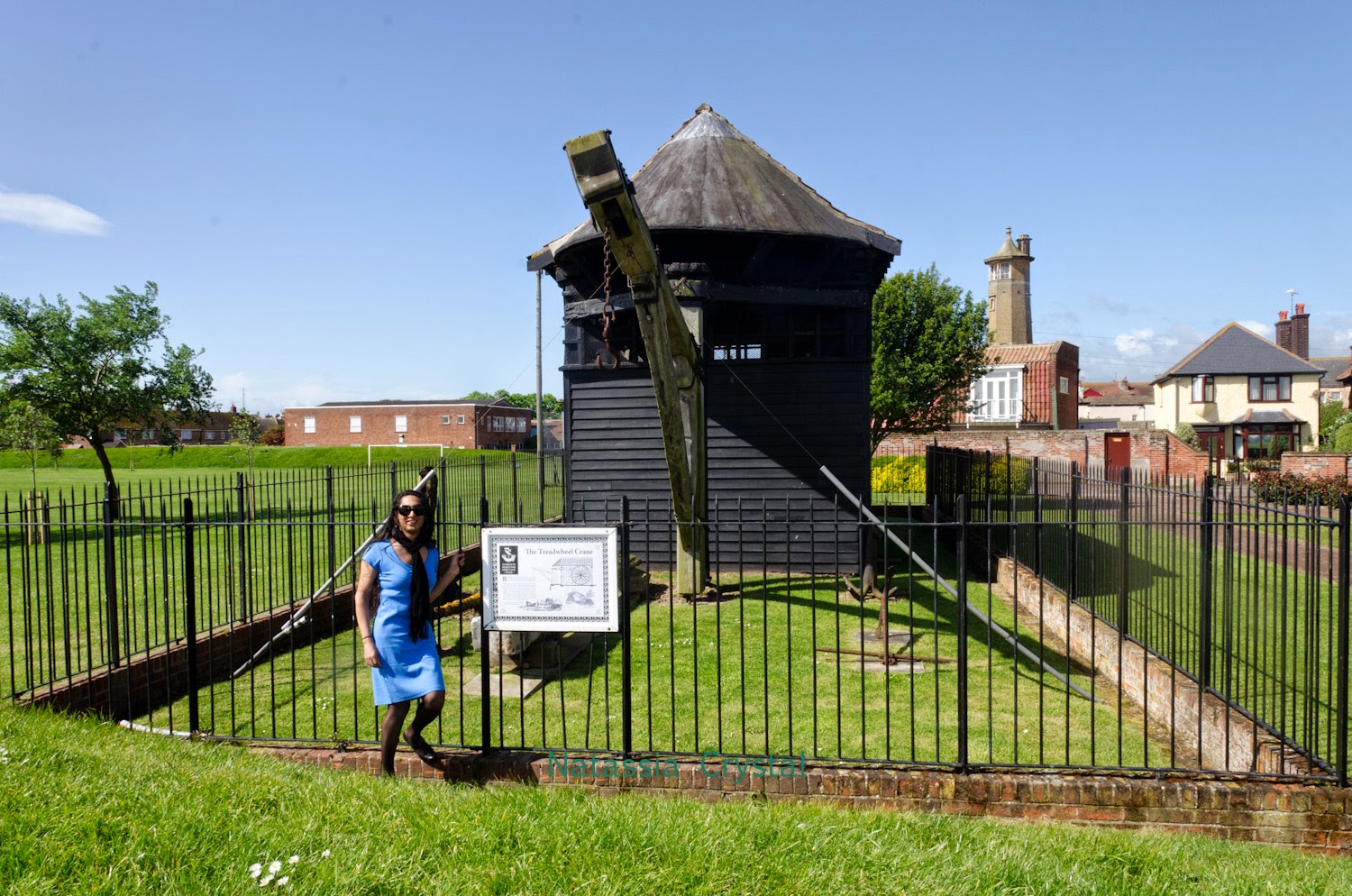 In summary, what I expected to be a dull grey morning in Harwich (and forcing Kay and me to have a coffee indoors), turned out to be super beautiful and warm! And to think this was only the start of my holiday in the UK. :)

I did not take any videos while I was in the UK.. so here is the link of the last one in Belgium, in case you missed it!

Posted by Natassia at 7:01 PM No comments:

Working in a coalmine

Carbon is the source for a lot of useful things. One of these things is anything related to diamonds! Also, as a self-proclaimed science geek.. it's also used for nano-tubes, which is an awesome piece of scientific work in itself. What I can tell you is that things are super strong. For more, just go google it. Because sure, I do want to include geekiness in this blog,.. but I know y'all mainly want to see some pics and possibly vids. :-P

Yet another thing carbon is know for.. is coal.. still an important source for energy. And that black stuff is dug up in coal mines. Some of them are still open, a lot of them have been closed. A couple of them have been converted into museums so that the public can actually see for themselves what used to happen decades ago. The museum I visited (with my friend Julie) was in Genk, Belgium. 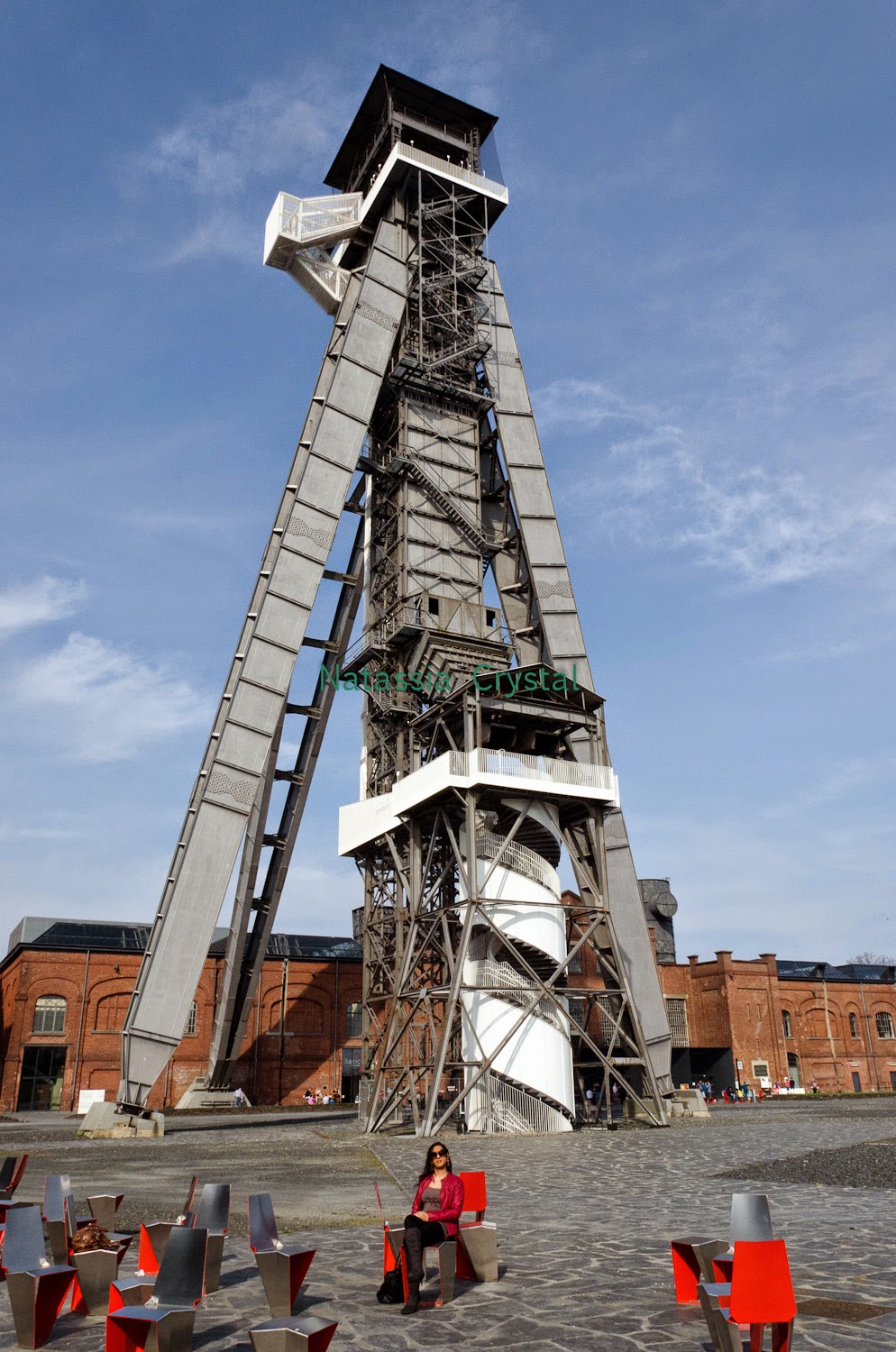 Yes, that tiny speck down there is me! It's an impressive high (62 metres) structure and it just made me feel so small.. and just to think that the shaft went down more than 1 kilometres! 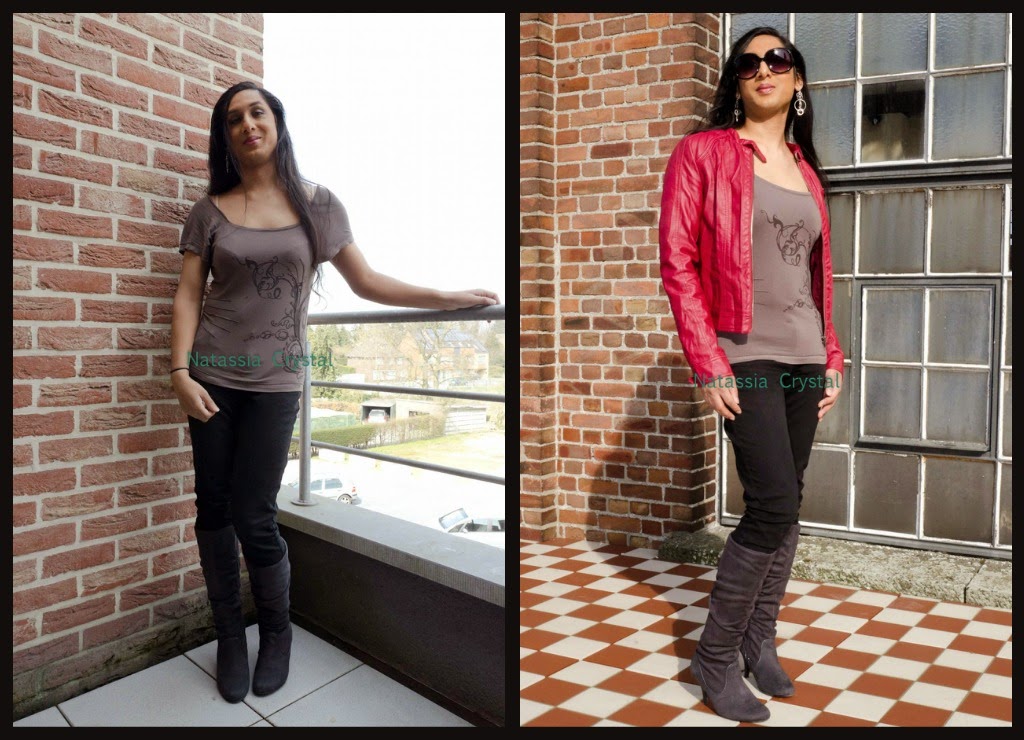 First of all, the outfit. As you all know, I love my dresses and my super high heels! There are times though when that just isn't that practical. So I went for casual chic and for me.. that usually means some jeans, a cute top and jacket. And lower heels.. which in my case still means 3 inches. Because flats are for when I'm old (not saying that flats are for old people and little girls.. I said when I'm old! 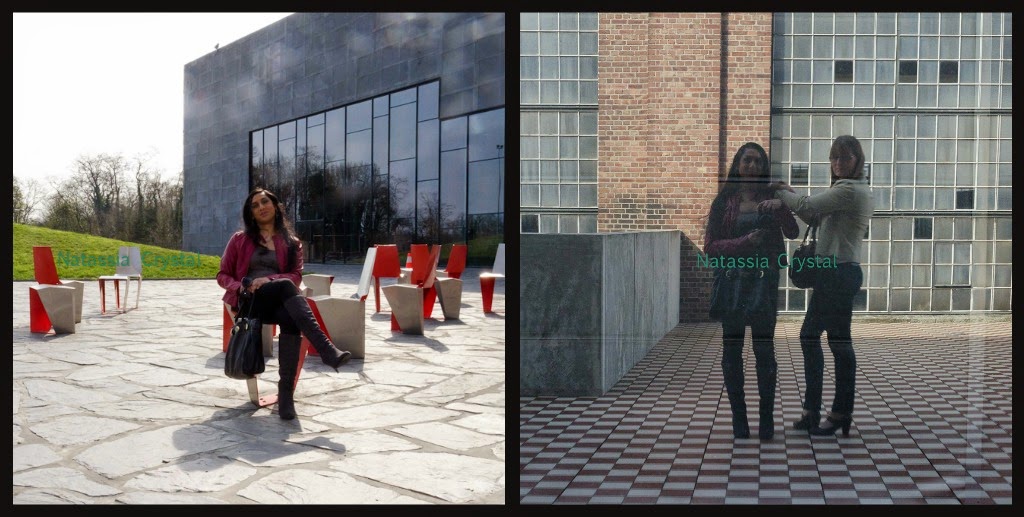 The main square of the mining complex was completely cleaned up and filled with these hip design seats. So after walking a lot in heels,.. obviously I had to sit down. On the right, I took a quick pic of the reflection Julie and me in the window.. how is that for artistic photography? :-P 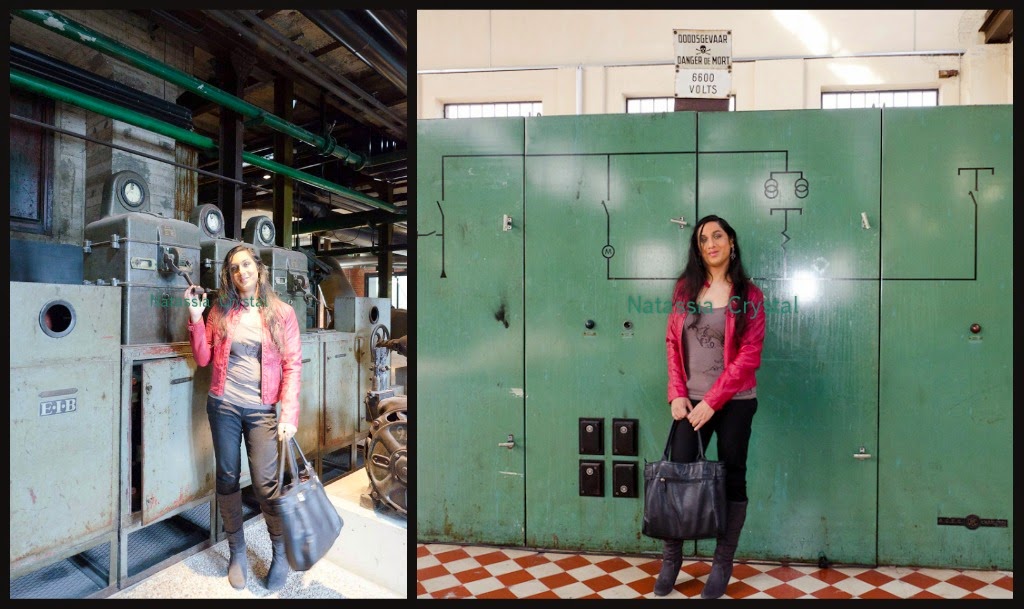 Of course, it's not just about all the mine workers descending into the depths of the earth and digging up coal. To make all of this possible, you need equipment.. generators, electrical machines and all this cool stuff developed by the brightest electrical and mechanical engineers! As a physicist, I cannot but be in awe of their ingenuity! 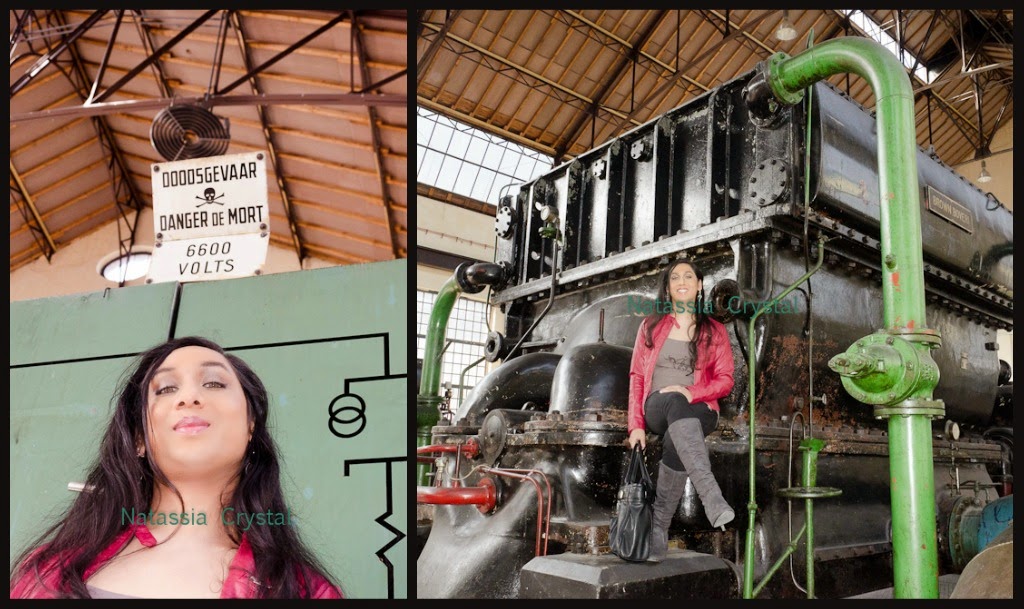 The sign says "Danger of death"... but I know that it does not only depend on the voltage.. it also depends on the current. Still, 6600 volts... never pleasant!

Of course, being there and being vain.. I used these constructions as a place to model. :-P 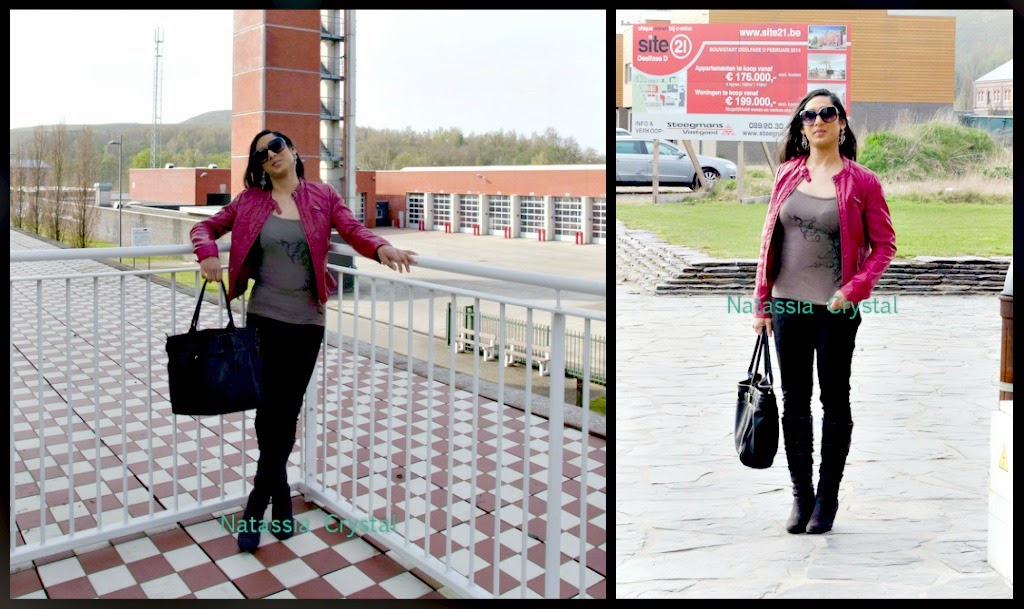 After a very educational and impressive tour inside, we went outside again for some posing. Whenever I'm dressed up and whenever the the weather is nice outside, I will bug someone to take pics of me, thanks Julie!

And she was also gracious enough to film me.. so there is actually a small video again! :)