Tassia in the UK - shop till you drop in Southampton

So, my previous post was basically showing off the golden dress I got during the shopping trip in the centre of Southampton. I do hope you liked the golden dress, because one of my next posts will also contain a golden dress.. a different one.. not mine but of a friend.. but nevertheless golden. :P

My shopping partner was actually wearing the blue dress and the black gladiator sandal heels during the whole shopping trip. I, on the other hand, didn't really know what the standard shopping outfit was in England. And when I don't know.. I just play it safe and go for jeans, top and vest. And no super high heels.. just boots with a normal 4 inch heel. :) 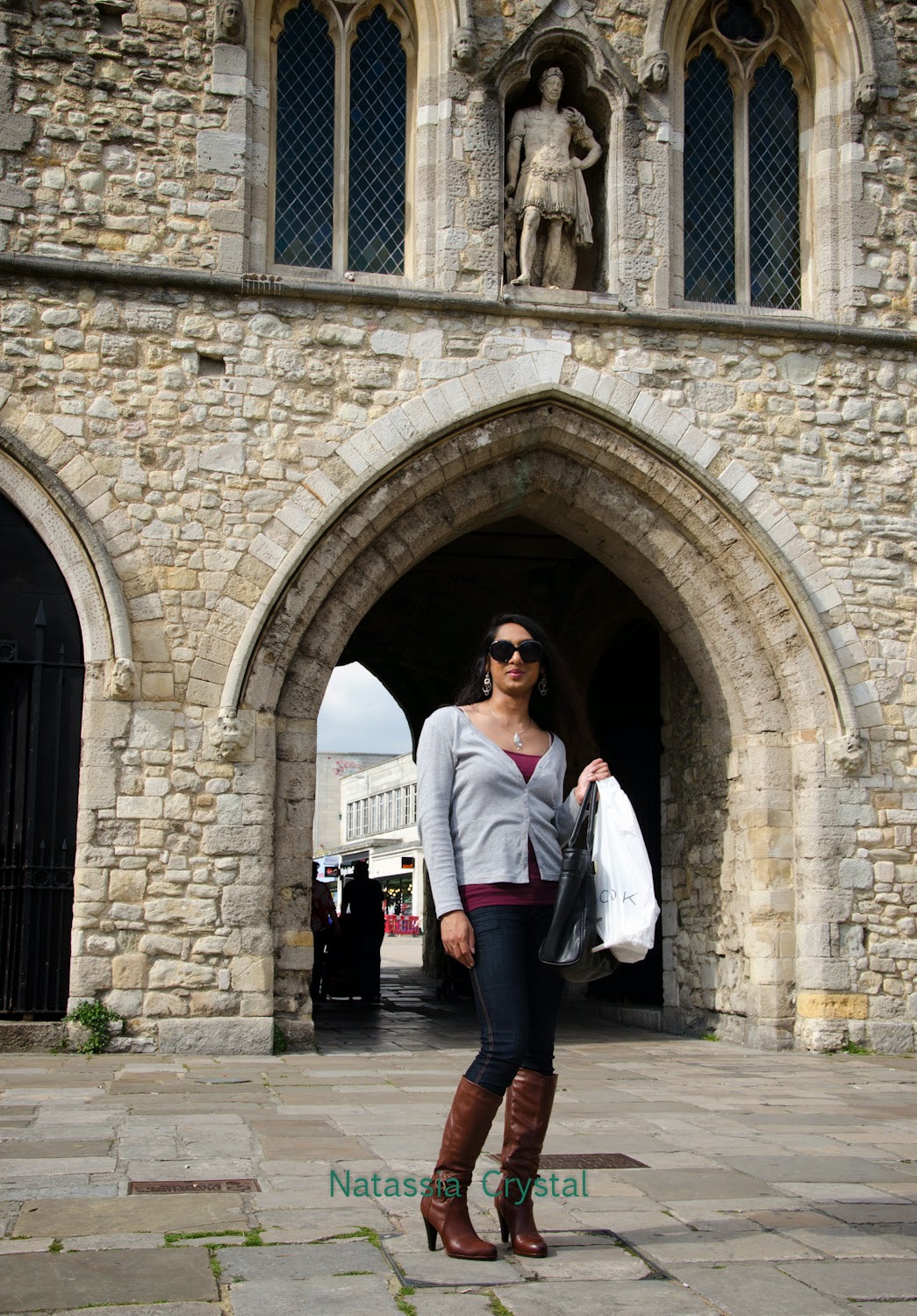 Obviously, I didn't just shop.. I was also doing touristy things and this pic above is me standing at a medieval Southampton city gate, called The Bargate. I'm sure you all know Wikipedia, so I'll leave the tour guide stuff up to you. :P 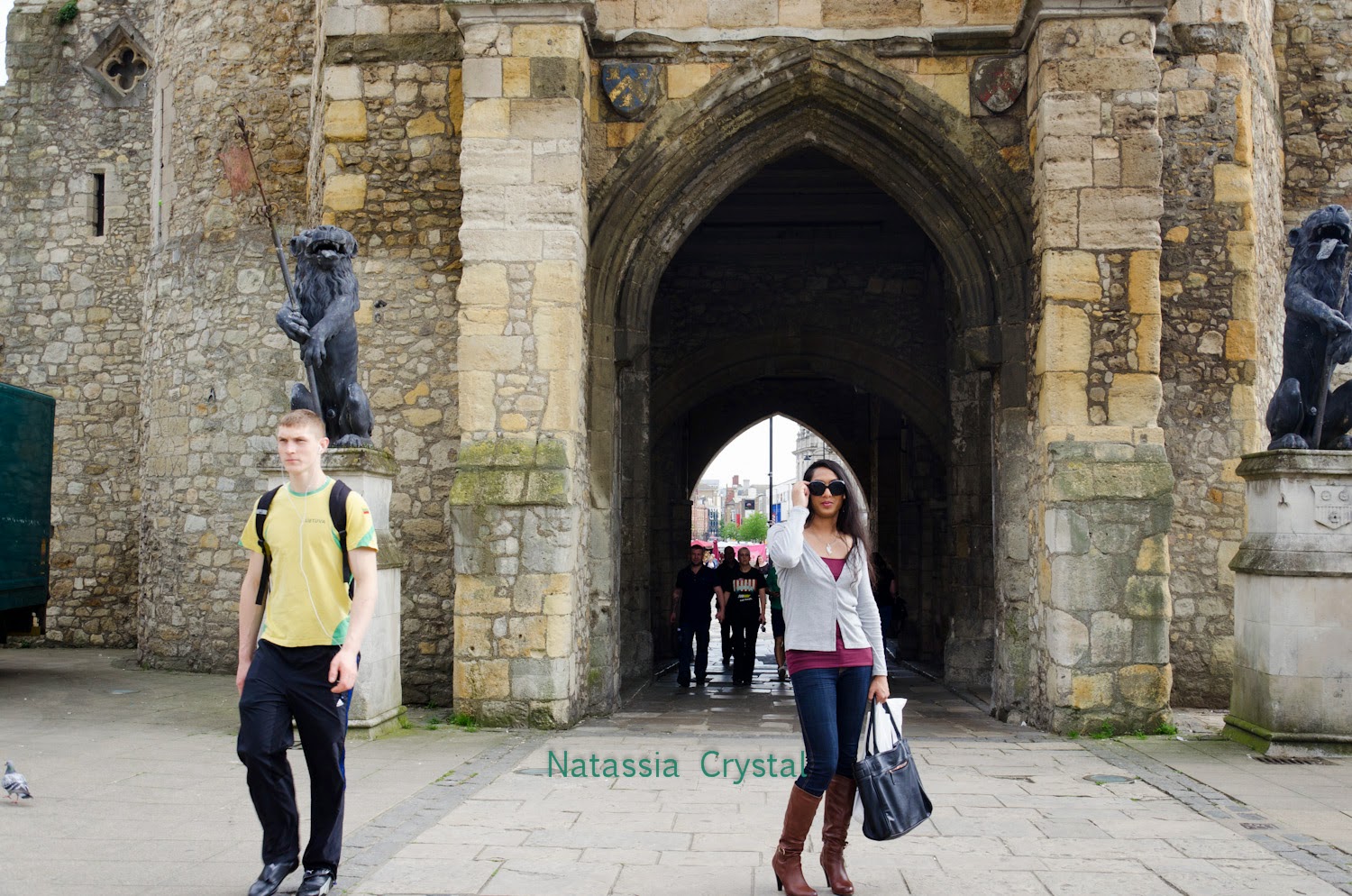 It was a very busy spot and at a certain point, I was tired of waiting for a moment without other people, so my friend just clicked the button and we were on our way!

Seeing as I already have a lot of crap in my closet, I told my friend that I didn't really need anything in particular. However, if she knew a few good places to look at shoes.. then I'd be very happy! :)

So, after a few stores, we ended up at the New Look and they had a lot of shoes I liked including these two pairs of white heels. Which ones do you like the most? 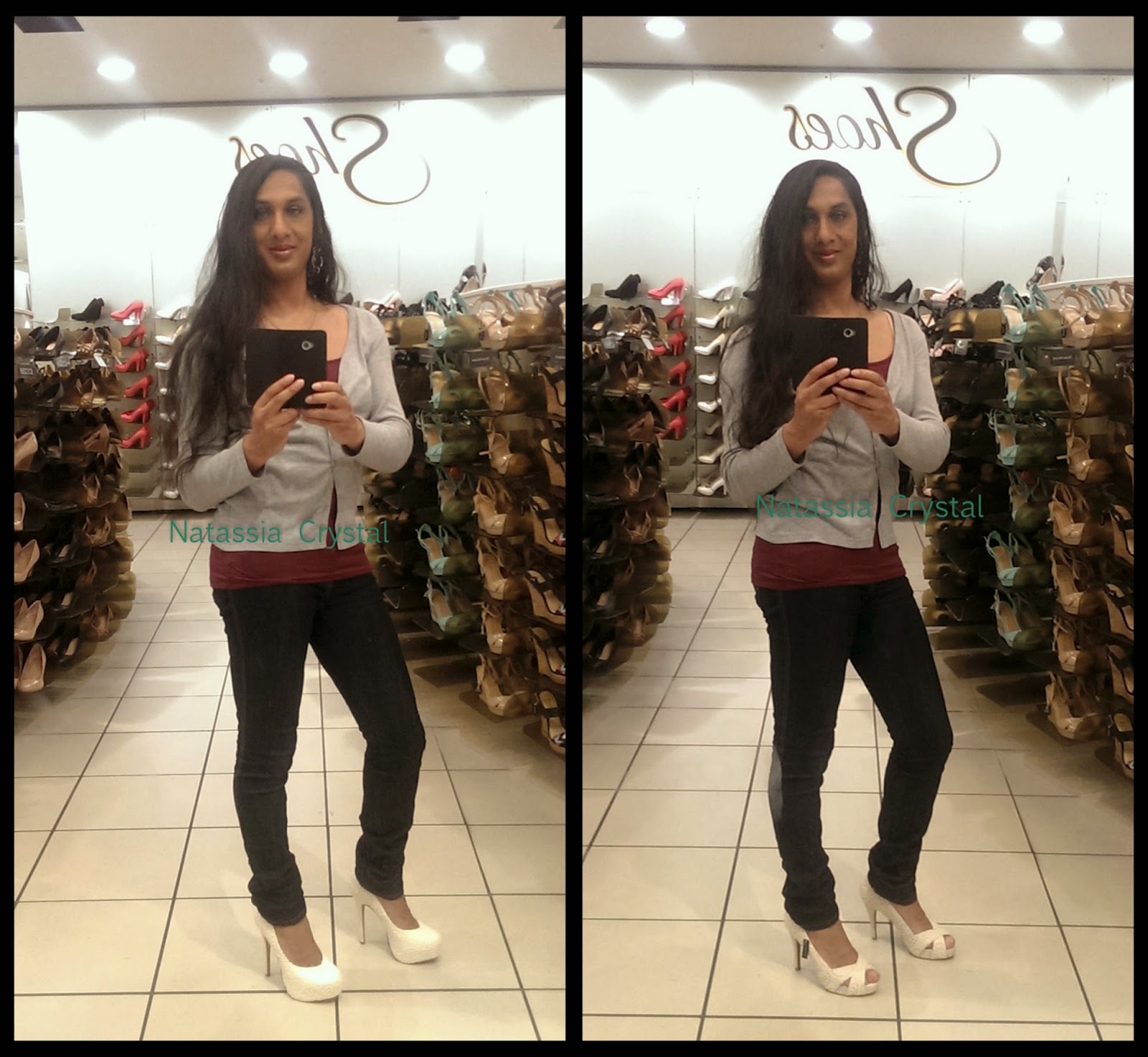 I hope you said you like the peeptoe pumps because those are the ones I bought.. together with black ones. 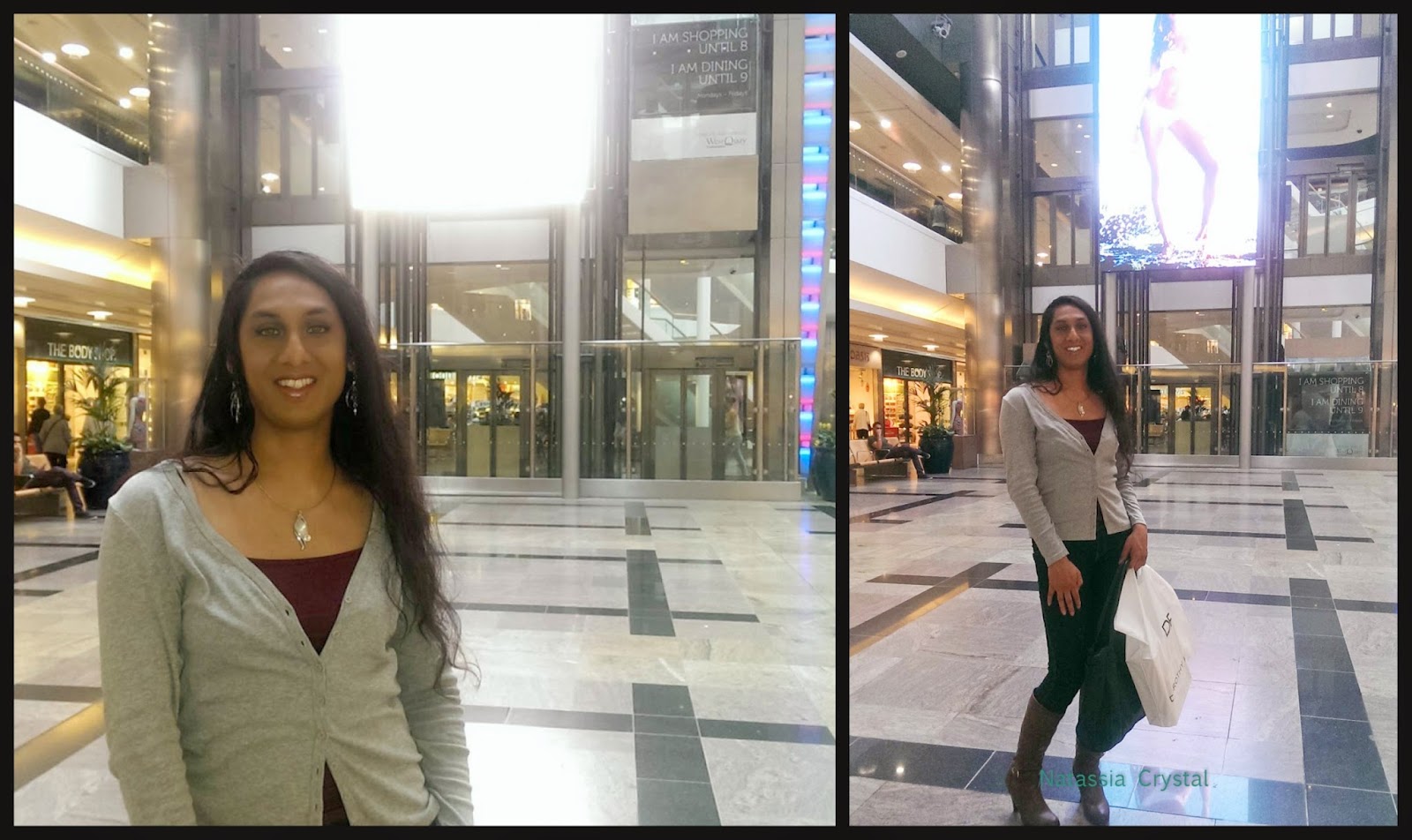 We did some more shopping and bought a few more things.. and walked around in the shopping mall. I wish I had the figure of that model displayed on the screen! :P 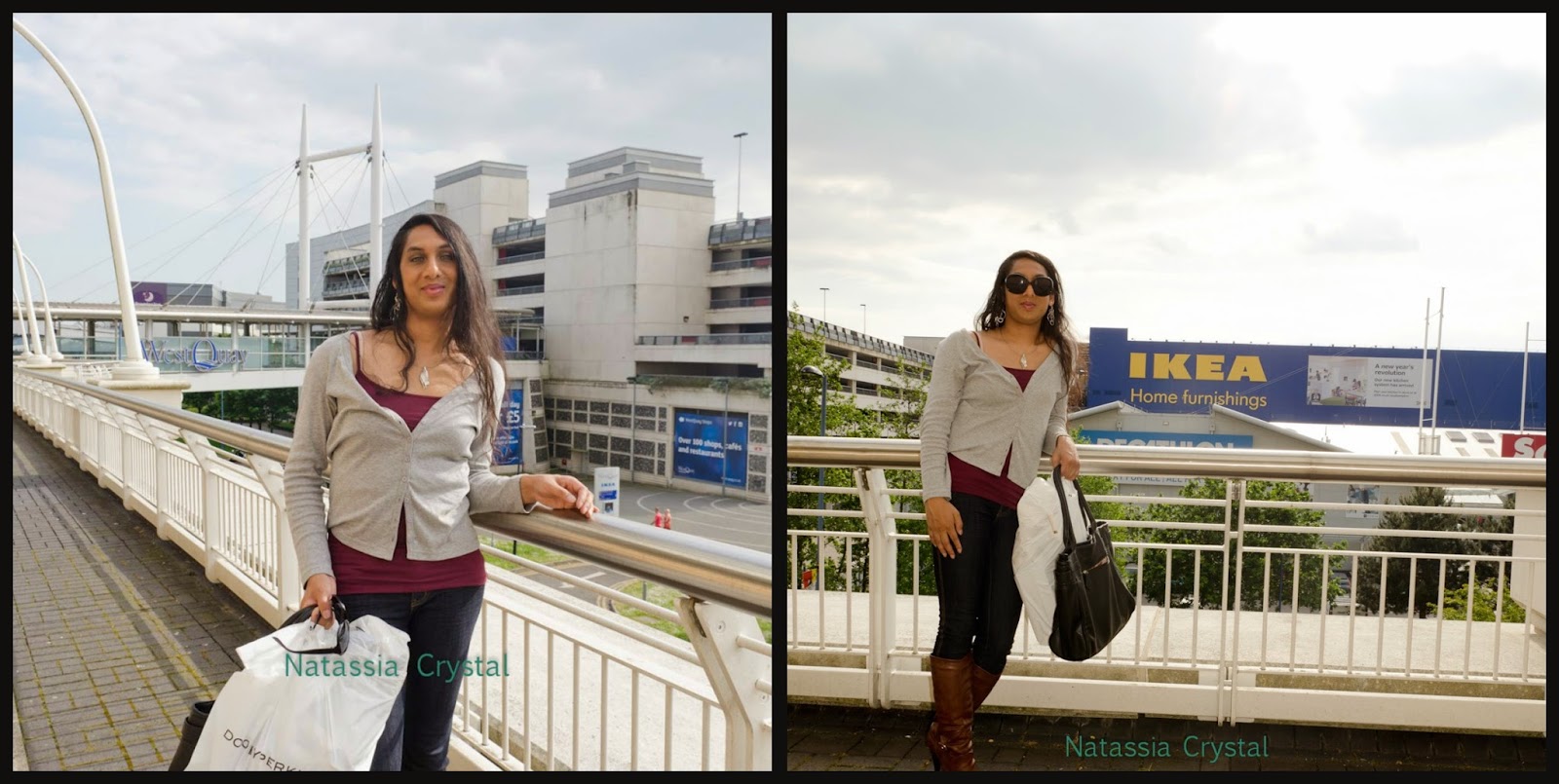 After a fun day, we went outside the mall, soaked up some daylight and had a frappucino at the local StarBucks.. and then we went home where we had a delicious dinner cooked up by my shopping partner, after which we did some modelling with me in the golden dress! 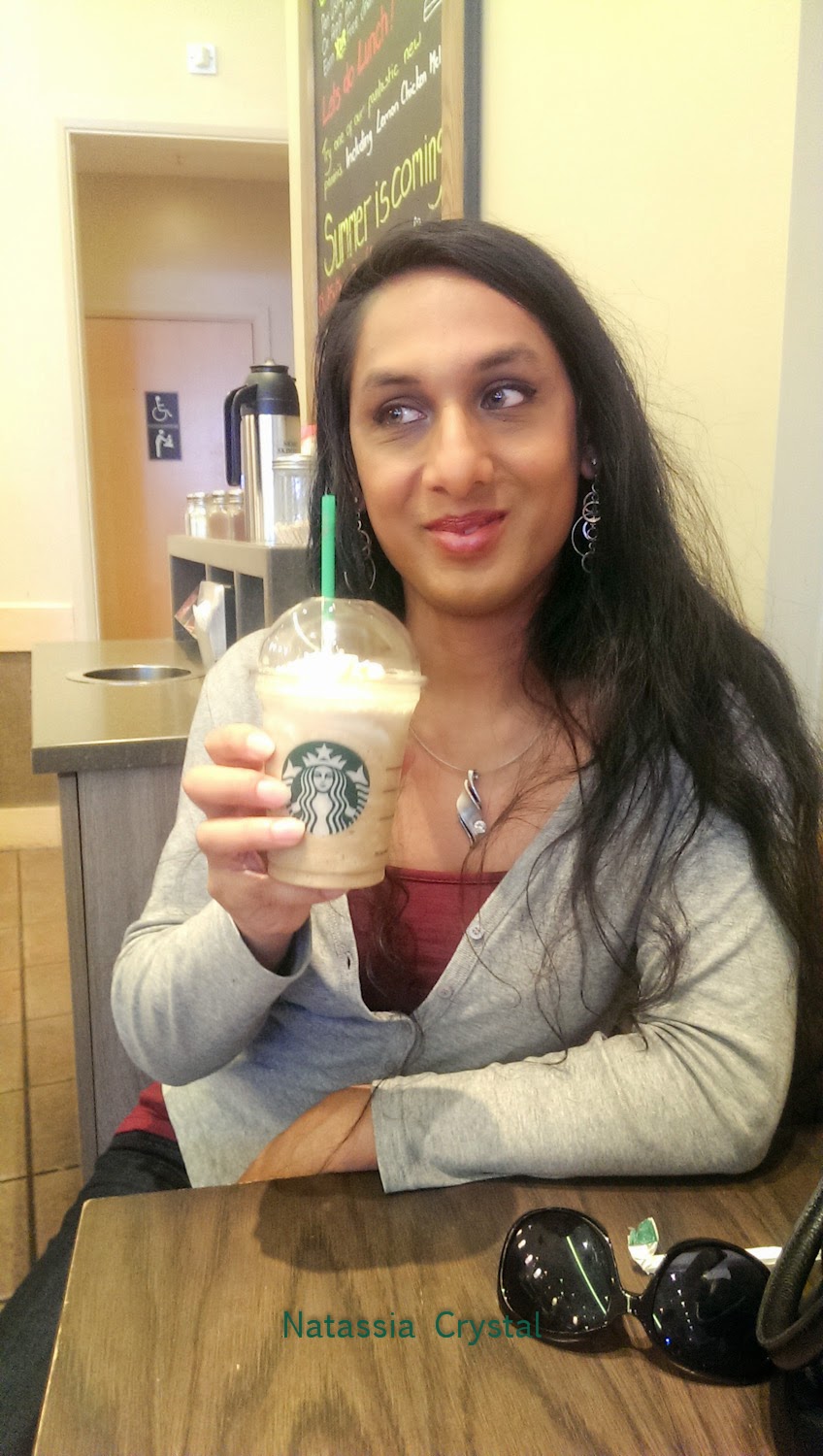 As you might have noticed, I uploaded a video with me in the SuperTrash Orange World Cup 2014 dress. I'm not going to spend a separate post on it, so enjoy! :)

Tassia in the UK - glittery gold

Okay, so I wrote most of this blog-post before the Ukraine MH17 plane disaster (presumably shot down). 298 innocent people died in this tragedy of whom 193 Dutch men, women and kids.. some of them babies. This happened last Thursday and even though I personally don't know anyone who has perished, I was shocked and dazed. One tenth of one percent of one percent of the Dutch population was killed.. and this is the same order of magnitude as the number of Americans who died during the 9/11 attacks. Thus, I take my moment of silence... 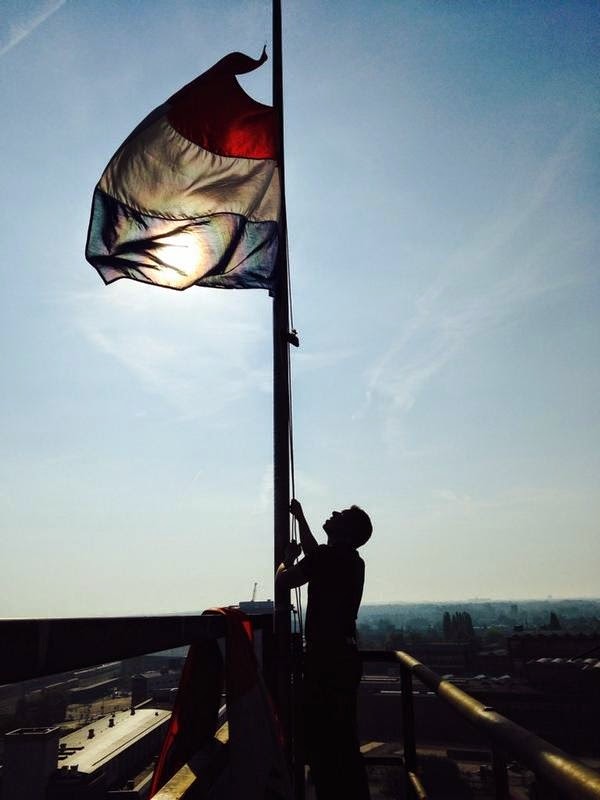 Life, however,..  does go on. And what better way to cherish the fact that in the Netherlands.. we do live in a "war and conflict"-free zone. And compared to places such as Ukraine and Russia, I have the freedom to express myself without repercussions from the state. Thus, onwards with the dressing!

As you might recall,.. in May, I went on a two-week trip to the UK and me being me.. I combined chilling and relaxing with shopping and dressing up! Among the places I visited after I left Essex... were Bath, Bristol and Southampton. I also visited the smaller cities and towns and the Isle of Wight, but I'm not going to bore you all with every single detail of the holiday. :P

In Southampton, I did a bit a shopping with a girlfriend of a friend (which lends itself for another post). I actually didn't need anything, but you know how these things go.. you see something you like and you're sold! Two of the things I got were 1) a cute pair of black peep-toe pumps from New Look and 2) a gold glittery dress from a fashion-for-5-pounds store.

Sure, it might sound cheap.. but that's only because it is! :P 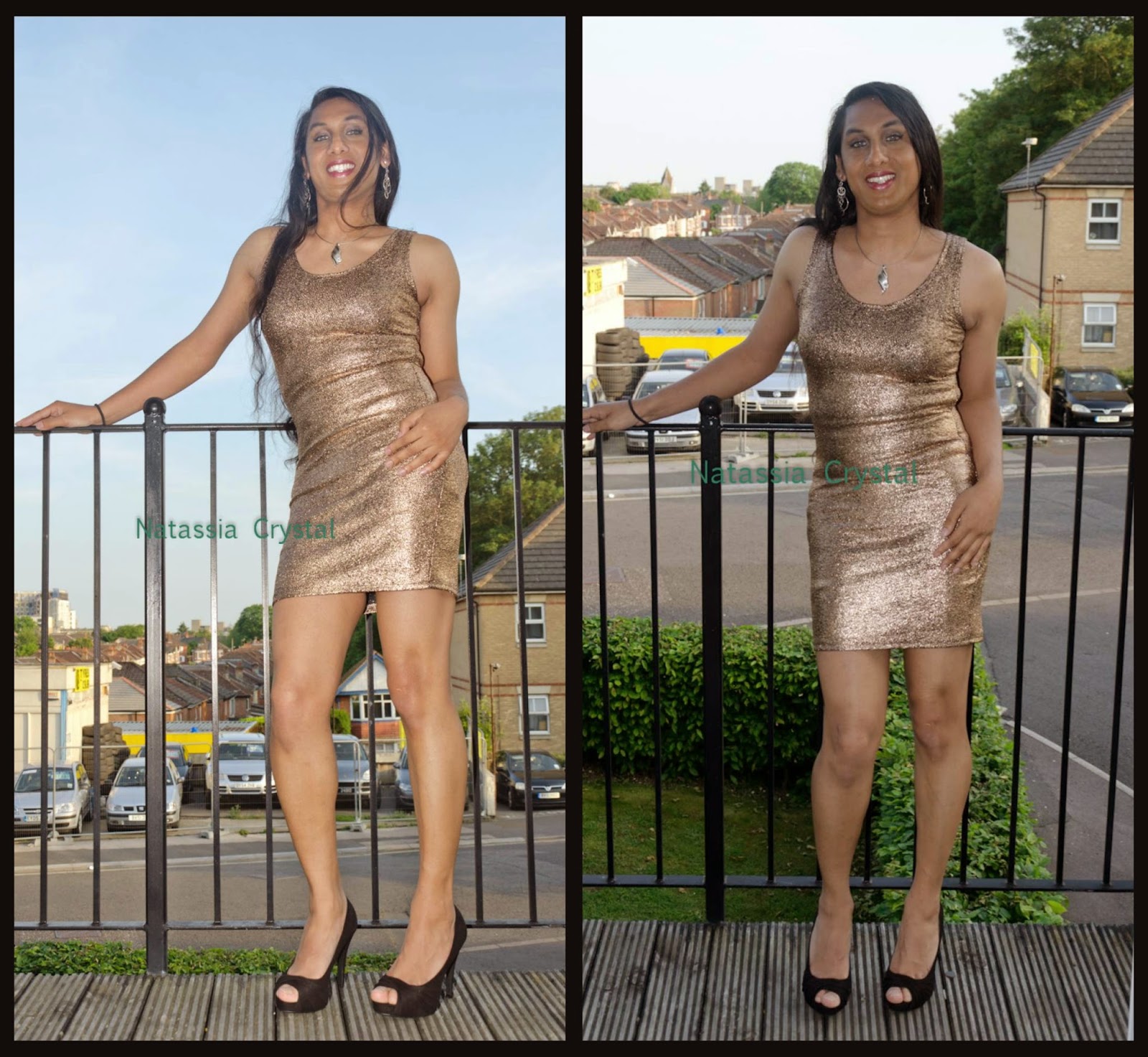 One of the advantages of having a shopping partner who knows the malls and stores is that you can say something vague like "I need cute heels".. and she will know where to go.. and you will succeed! And if you ask for a "cheap dress".. she will know the perfect store. There were so many cool cute dresses.. I wanted to buy more, but in a rare moment I showed some self-restraint. :-P 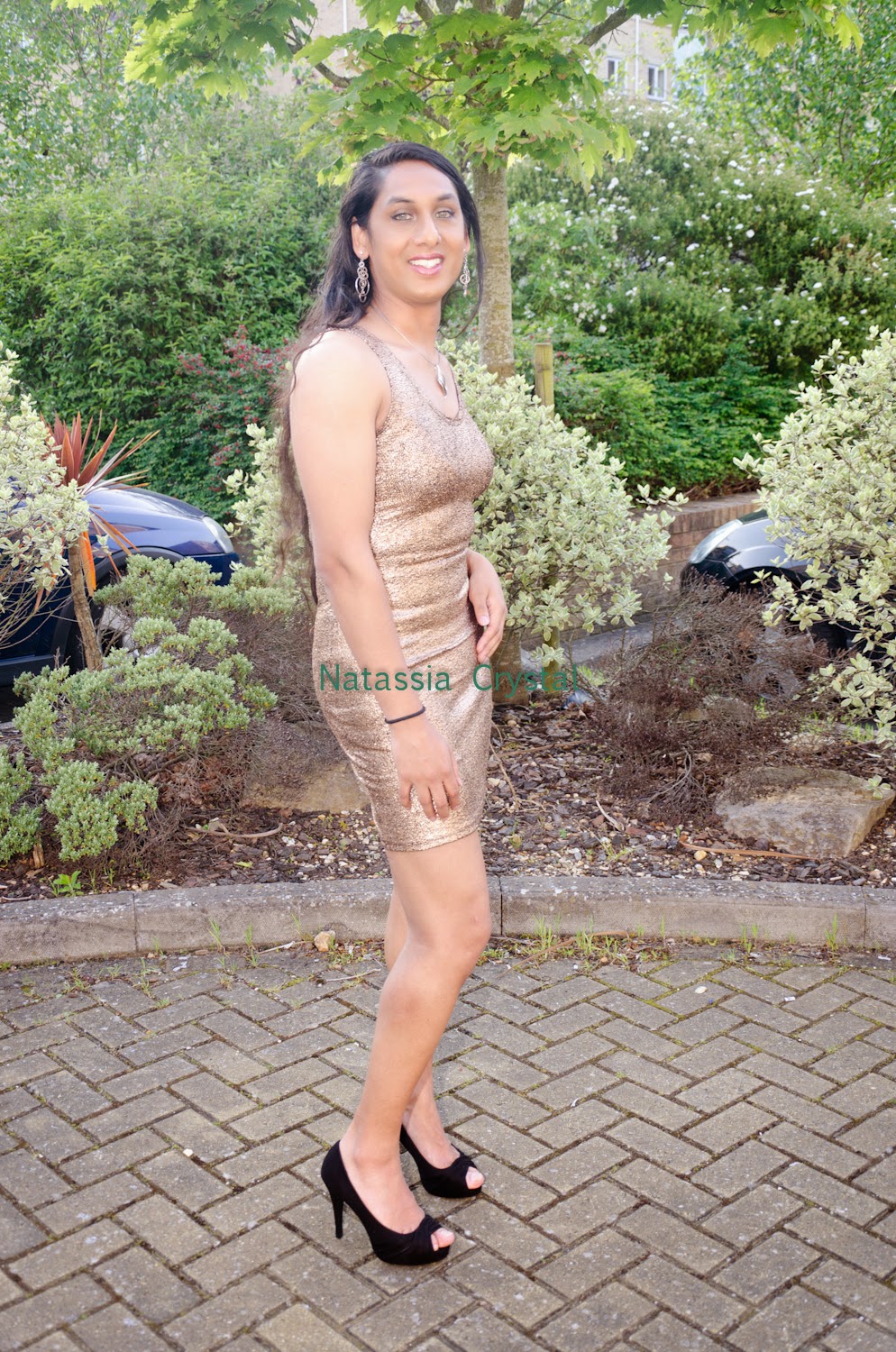 About this posing thing, I'll admit to gratuitous over-top-posing, but sometimes you've got to take a step back.. and have a little fun. :) 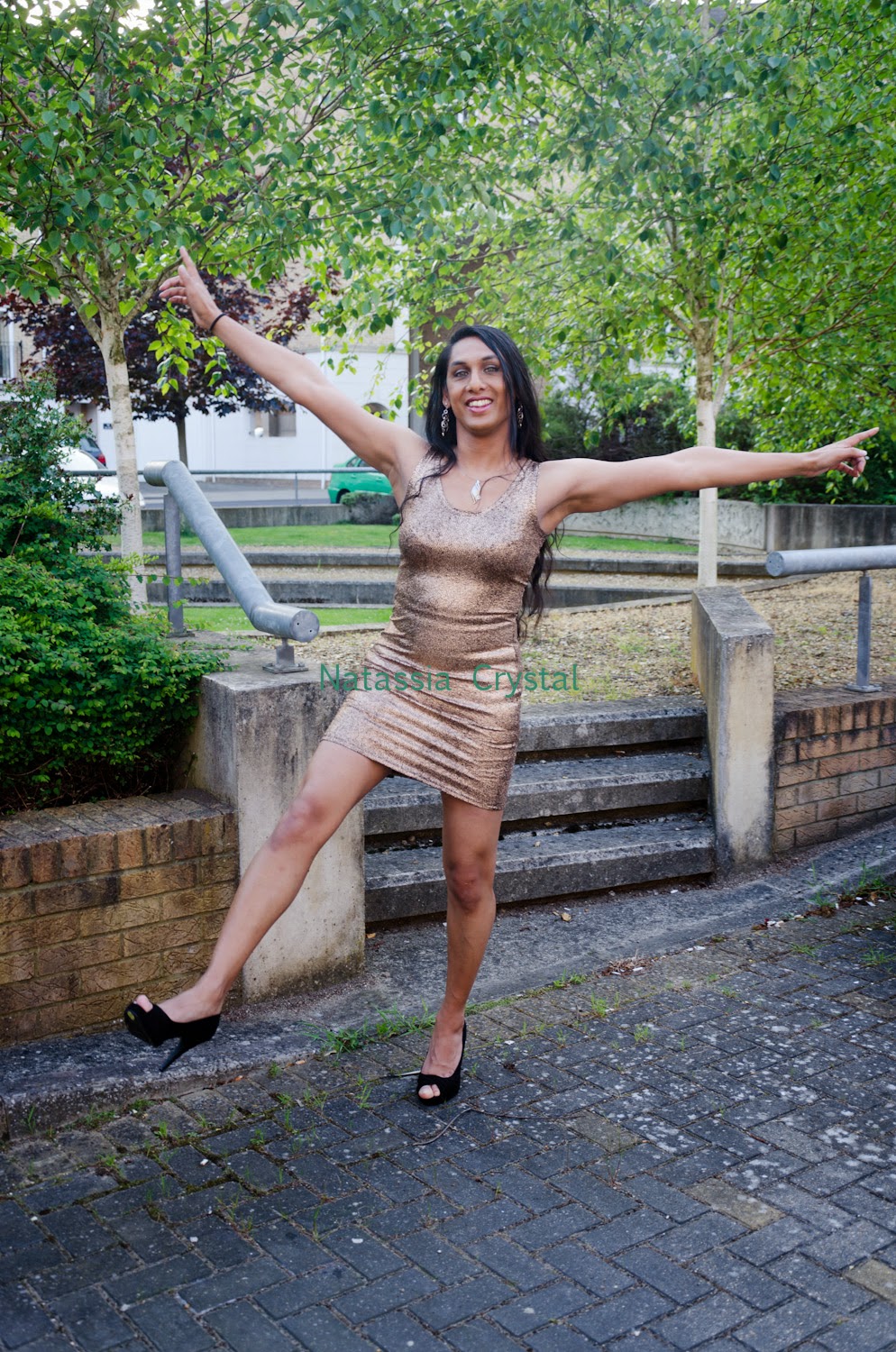 Of course, that day, I was very happy and thankful for my shopping partner who accompanied me in a dress and proper high heels. And from what I could tell, she was also having fun while shopping with me (more on that in a later post). So, I could not write a blog-post in a good conscience without at least showing the two of us acting silly in front of the camera. I did blur her face to protect the innocent, but trust me, she's a beautiful girl who looked gorgeous in her blue dress and heels! :) 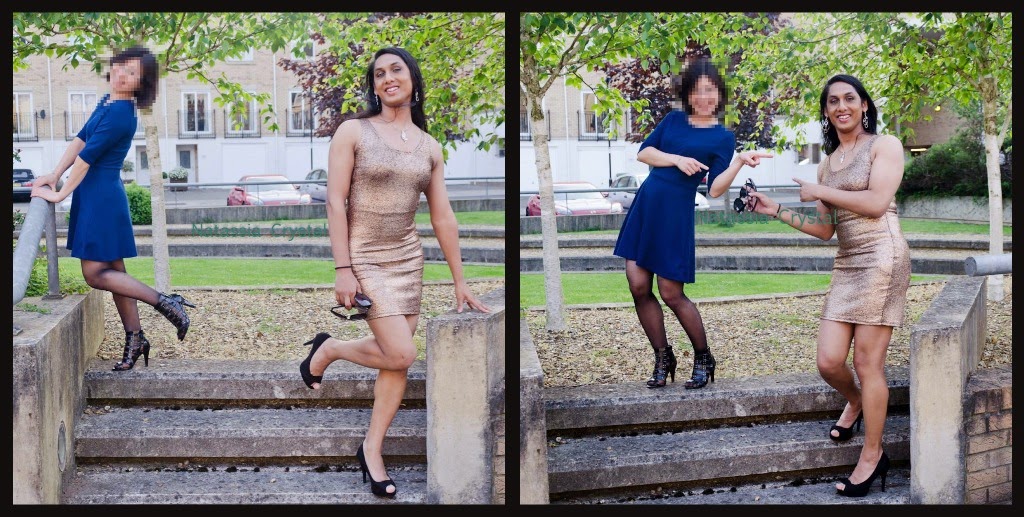 Working on new videos.. just need to find those preciously few moments where I can sit and relax behind my computer with a cup of coffee to do some proper editing. In the meantime, enjoy the two most recent ones! :)

A day on the campus

Okay, taking a temporary break from the Orange madness. That is.. until tomorrow night the Dutch beat Costa Rica... am hoping for the best, of course! :P

I've been wearing blue and orange, so I thought it was time to go for the simple LBD and black high heels outfit again. For me, it's a safe outfit choice and seeing as I was visiting the campus of the Erasmus University.. known for its business environment, I didn't even stand out too much! 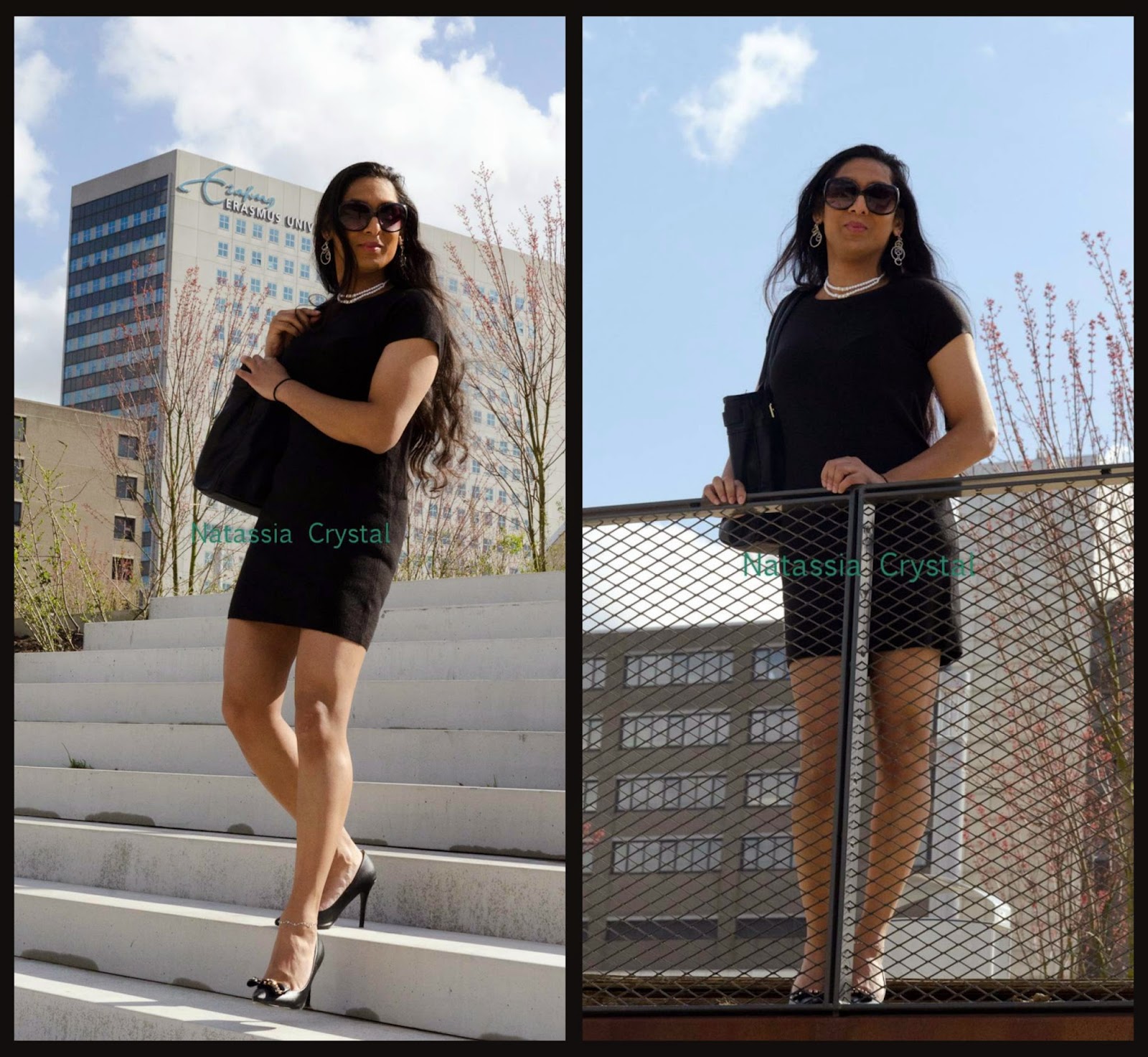 People who know me.. know that I'm an academic person. And as such.. I do walk around this campus and other campuses a lot of the time. Most of the time though, it's in a jeans and shirt. Fortunately, this sunny day was a great day for wearing dresses and high heels! 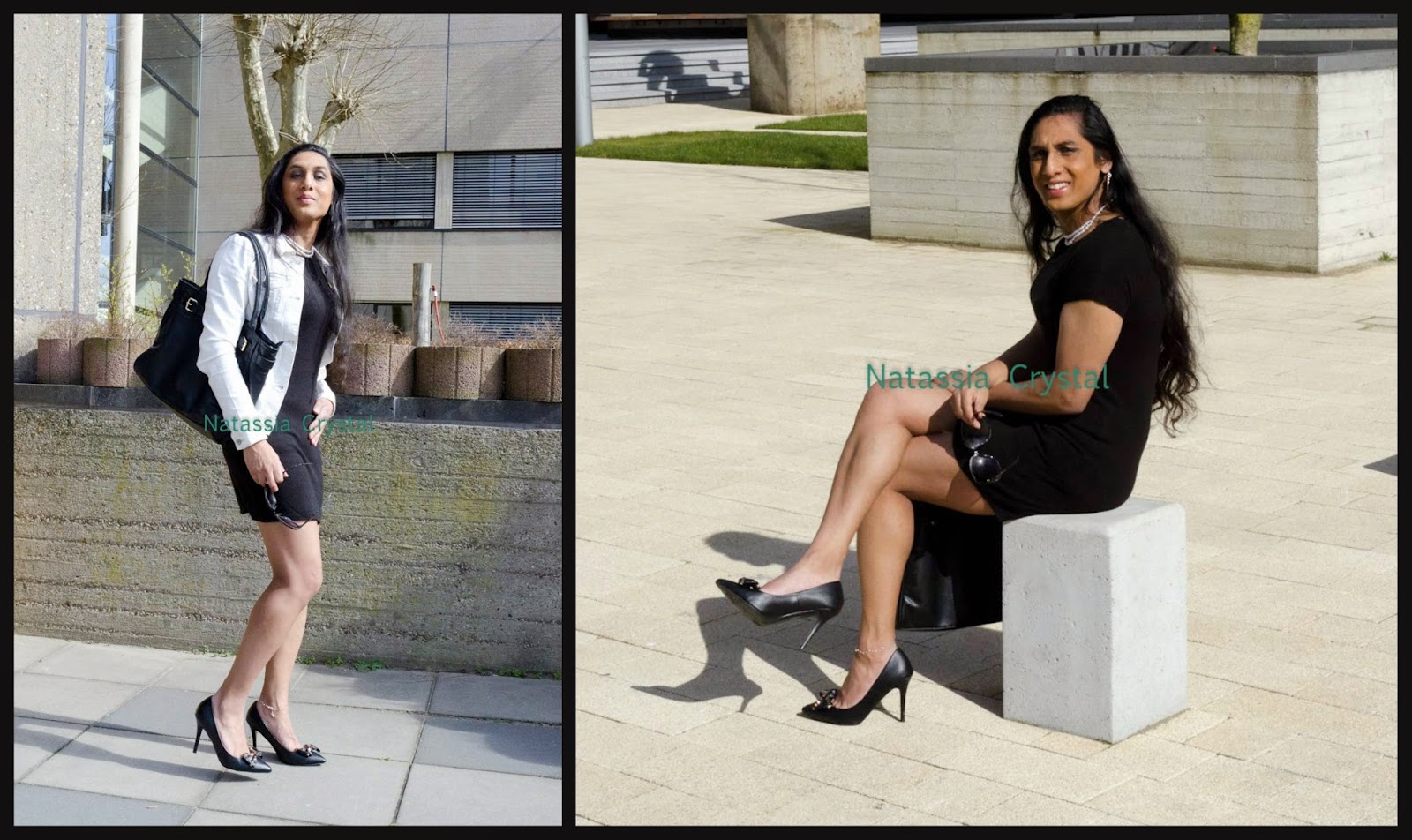 The dress is by C&A Yessica, the jacket is by C&A Clockhouse and I ordered the heels online from Boohoo.com. This whole outfit probably cost me around 50 euro... I'm just a sucker for sales. Which is probably a nice way of saying that I'm cheap. :-P 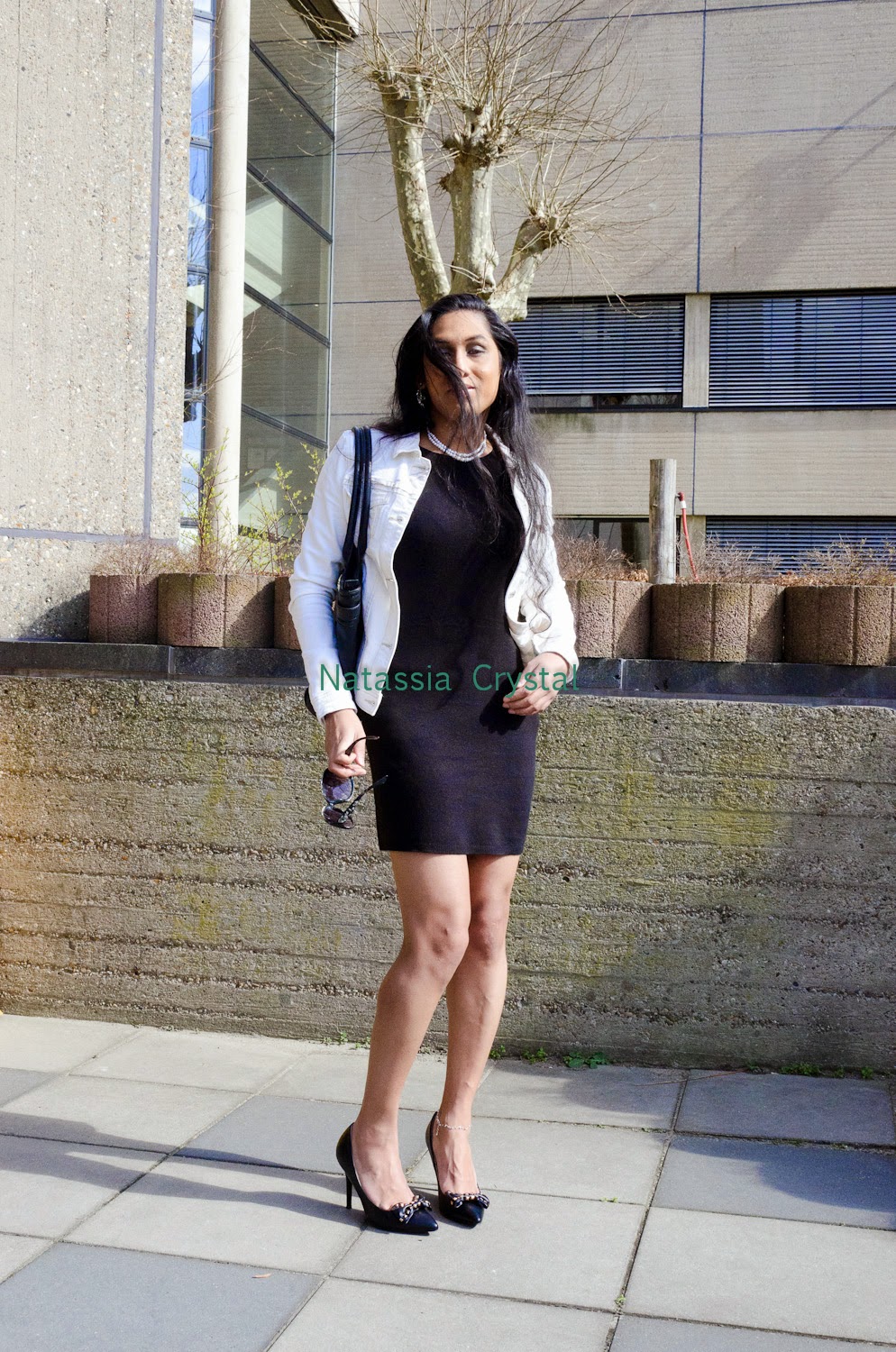 By the way, this is why I'm glad digital cameras exist and you actually get to immediately look the result. There was quite a bit of wind.. and with my hair.. that regularly means there's hair in my face. And this is not a very charming picture! So I'm glad I got to re-take this shot. :) 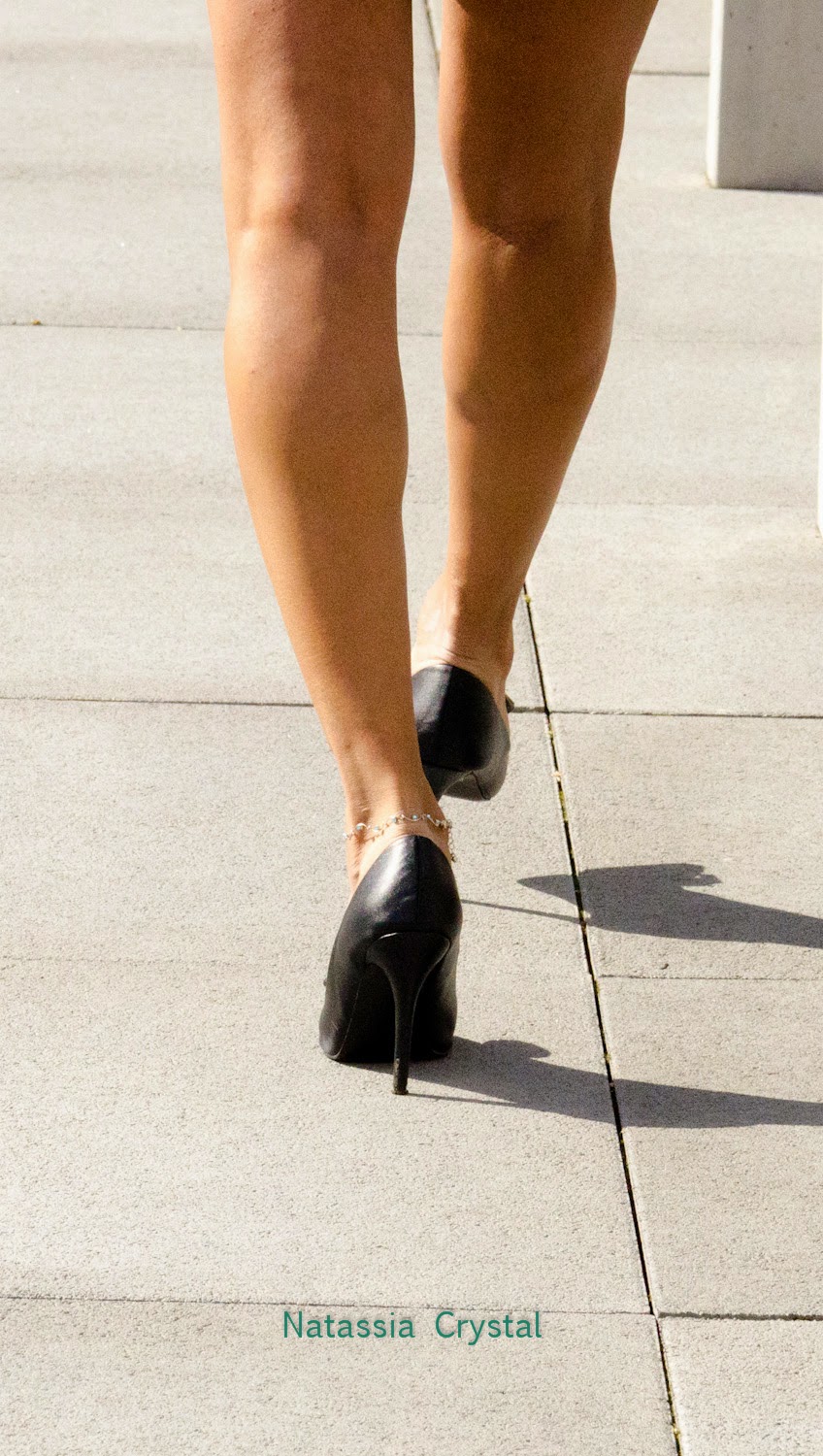 When I was walking away, my photographer took a snap of my legs and heels. I quite like the shot, so I thought I'd include it in this post for those of you who.. (like me) .. enjoy legs and heels. :)

My photographer was so nice to shoot so video footage, so I was able to edit a new little video! Enjoy the clicking of the heels!